The Pixel Fleet live wallpaper gives you a reason to visit your home screen besides switching between apps. There's a war being waged out there, and you get a front row seat. Lasers will be fired, lives will be lost, and explosions will brighten the sky. There's a lot of entertainment here for a download that looks like a game and smells like a game, but isn't. 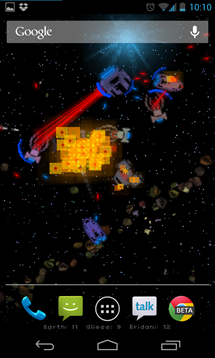 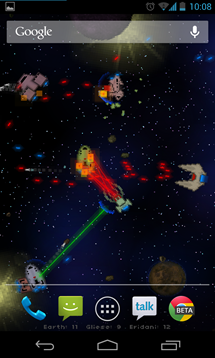 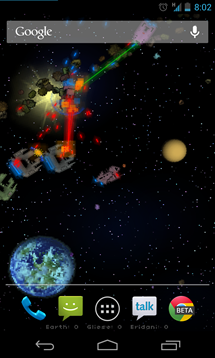 Pixel Fleet pits two factions against each other. The ships will fly around your home screen, firing at will until they each succumb to enemy fire or crumble under the weight of your own double-tap. Each ship is guided by its own artificial intelligence, meaning no two engagements will be the same. This isn't a pre-scripted animation, so no matter how much time you waste staring at your home screen, you will always have a reason to keep doing so.

Pixel Fleet comes in both free and paid variants. The lite version of the app offers three ships, with one coming from each faction. The paid version doubles the number of ships and introduces dynamically generated backgrounds complete with planets, asteroids, moons, and more. If you want to know who's winning the war, the paid version keeps score and monitors a whole host of stats tracking the behavior of each faction. There is quite a bit of value for a live wallpaper that costs the usual 99 cents.

There's no shortage of live wallpapers available for Android, but the pixels that Pixel Fleet sprays across your home screen are some of the most engaging we've seen yet. If you aren't put off by the retro artwork, download the app below and let the war begin. Carmageddon Crashes Onto The Play Store - Free Promo Version Up For 24 Hours, Too (Though It ...