Man, Google Glass moves at the speed of light. This is crazy.

The Glass Team is still extraordinarily messy; any new file usually has copies in a million different locations. Basically, everything ships in every APK. Maybe the Glass Team is using extremely bad organization as a form of Teardown obfuscation. (It's not working.)

It looks like note taking is coming to Google Glass! There's a new file in every glass APK called "google_glass_takeanote_en_us_alpha_sfs_delivery01_am.raw". I am 90% sure .raw files in this context are voice recognition files, so "Take a note" is probably coming as a voice command. That would be so amazing.

This is one of those things that ships in every APK. There are 13 copies of this file.

I also found a thing in the main menu commands that prompts you to "speak your note." That's probably tip text that will pop up after you issue the command.

I really don't have anything other than this one file to show you. I have no idea where the note would go, or what it would interface with - hopefully it's Keep.

In fact, here's a list of the voice commands I found in a java file:

"Take a note" is in there, but so are some menu commands: "Read Aloud," and "Reply." There's also a "Show more commands" voice command, would is probably how Google will stop the "ok glass" screen from getting too long as development continues.

One of the things I had sort-of complained about in my XE4 Teardown was how most of the Glass interface was basically a single APK: GlassHome.apk. Google seems to be working toward ununification, because now the camera app has been broken out into its own file: GlassCamera.apk. 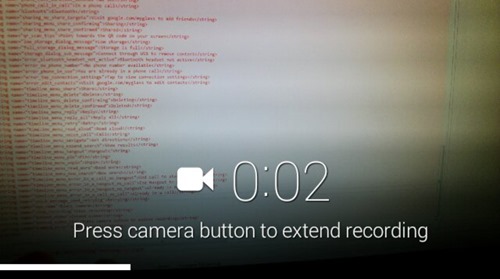 Other than the new tooltip I showed in my XE5 post, it seems to be the normal camera app, just separated from GlassHome. But hey, organization is great! Hopefully this is a sign the camera is getting more work, like a framing mode. (There is currently no way to frame a picture before taking a shot.)

It seems like winking really is coming to Glass someday, as the Glass Team has added more winking stuff.  There's one new wink string:

This string is for a "tip card." The number sign implies there will be multiple tips, but there aren't actually any wink tips yet - it's still a work-in-progress.

There's also a ton of wink layout stuff now. Including a "wink_calibration_activity_menu.xml."

Good news for those of you hoping to get your Glass on in a language other than English: there has been some localization work on Glass. Android apps ship a stock "values" folder, which contains all the text for an app. Localized apps have additional folders called "values-xx," where "xx" is a 2 letter abbreviation for other languages. Before, Glass apps only had a single, English "values" folder, but now I'm seeing apps with the usual swath of additional
"values-xx" folders. The follow have been updated:

So it looks like we're only missing GlassMaps and GlassBluetooth. The normal Android packages that have had their localization folders removed haven't had them reinstated, but I don't think any of them are ever actually used, anyway.

That's all I could find in this update. Like I said earlier though, Glass is really messy, so don't let this discourage you from taking a peak yourself.

For Developers: AIDE Evolves To v2.0, Allows You To Go Native Like A Pro

[Update: Now In The Play Store] Hands-On: [email protected] Launches Android App, But It's Pretty Much ...