I know many of you have been longing for a way to filter the apps you've paid for into one convenient list. Neither the web nor the app Play Store currently allow this, despite years of outcry. Things are looking up, however, as I believe Google is finally paying attention.

Guess which suggestion showed up in this list today - in fact, it's currently the only suggestion that applies to the Google Play site and app themselves as opposed to various content types: Advanced content filtering on play.google.com and in the Play Store app. 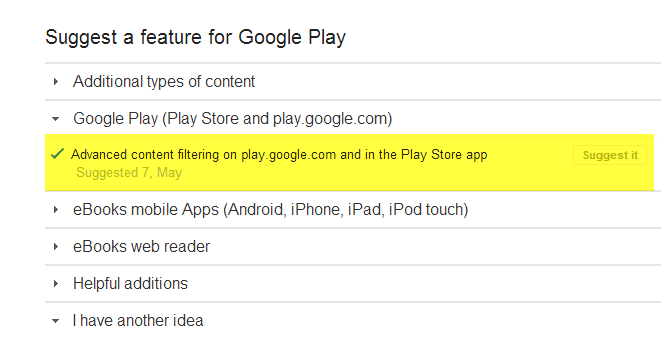 Can it be? Is Google finally ready to accept the epic challenge of adding a few checkboxes? It sure looks like it if you ask me.

There's one more new suggestion as of today, which I think is quite important as well: Ability to load your own ebooks into your books on Google Play collection (under Helpful additions). I don't know about you, but I'd love to see this implemented.

I think you know what to do.