Hey Sony. It's been a while since I last ranted about how you're kinda-sorta screwing up that whole smartphone business of yours. In fact, it's been almost a year to the day. I had really hoped that by this year everyone's favorite Japanese electronics mega-corporation would have figured out the smartphone market to a reasonable extent in the US, but surprise: they haven't!

I really don't mean to single out Sony, but sometimes, it's very difficult to watch a company that is very clearly capable of making good products make such terrible decisions.

While the company's most-recent flagship handsets, the Xperia Z and ZL, have been far from hated by critics, neither has received much in the way of real acclaim, and it's not difficult to see why: they're simply not as good as handsets from the likes of Samsung and HTC. You can only show the Xperia Z getting dunked into so many buckets of water before the internet collectively says "we get it, already."

It's really just the same problem Sony had last year: too little, too late. The Xperia Z is very pretty. It has very cool water and dustproofing features. Sony's Android UI overlay is not all that intrusive or ugly. But the Z is noticeably slower than its rivals, has an older processor, a decidedly inferior display, and is basically barren on the software innovation front. As for the ZL, it's basically the Z, just ever so slightly worse.

That brings us to the boring, $500 (really, $490, but close enough) mid-range phone headlining this piece. It's called the Xperia SP, and like its alphabet soup name, it is an utterly forgettable product. I'm sure it's not a bad phone, but its specification sheet isn't going to turn heads. It features a revamped Snapdragon S4 dual-core processor, 4.6" 720p LCD display, 8GB of internal storage, 1GB of RAM, and an 8MP rear camera that allegedly has some sort of relationship to the Exmor RS line of sensors. 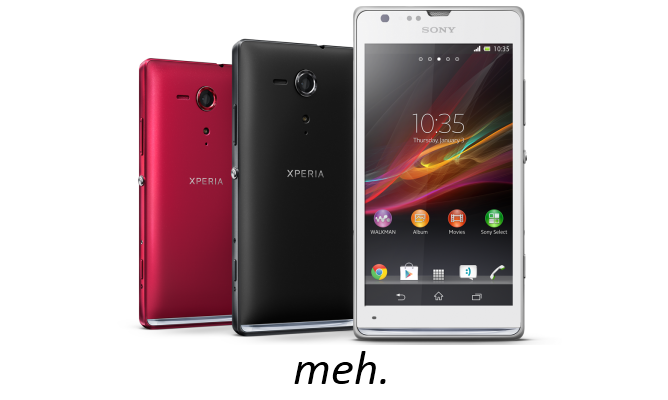 Basically, the Xperia SP is a phone any of us could relatively happily "get by" on. You wouldn't love it, but you probably wouldn't immediately regret purchasing it, either. And that's OK - mid-range phones are cool! I have no problem with Sony making this phone. They're building it to a price point.

The problem is, the price point is wrong. At least in the US. Maybe in some EMEA markets where unlocked phone purchases are common, Sony really can say this product competes with mid-range devices from Samsung, HTC, and LG. But now, Sony's trying to bring that model over to the US, and it doesn't take an MBA to tell you that it's not going to work. But I think even Sony knows that, deep down.

I doubt you'll ever see an ad for the Xperia SP in the US. It seems unlikely the phone will be picking up any carrier partners. And it's all but a given that outside of Sony's own stores (if even there) that the Xperia SP will have no physical retail presence. To average American consumers, then, the Xperia SP may as well be a buttbow-crapping unicorn. It is the definition of "not on the radar."

So why even sell it here, Sony? Why make it look like you're trying? I realize this isn't the only overpriced phone Sony sells on its US website, but it's absolutely frustrating to watch this tragedy of a sales "strategy" unfold. From an economic standpoint, what Sony's doing doesn't even make sense. The main advantage to the Xperia SP over, say, a Nexus 4, is LTE. You can use an SP on either T-Mobile or AT&T's LTE networks, though only the latter really has any significant coverage. But on its website, Sony tries to sell up cheap prepaid wireless plans that don't offer LTE service as an advantage to buying unlocked phones. You'd have to be gunning for a "bad purchase decision of the year" award to take Sony's $500 mid-range "meh" fest over a much cheaper (and much better) Nexus 4 to use on something like Straight Talk.

And if you planned on taking that phone to AT&T so you could actually get LTE service, that wouldn't make much sense, either - why pay AT&T upwards of $85 a month to bring your own phone when you could buy a high-end device on contract and just pay the ETF whenever you decide to switch? Even waiting six months would basically even out the cost of a subsidized Galaxy S4 + ETF versus buying an Xperia SP outright in this scenario.

Sony has been basically adrift in the US smartphone market from day one, and that's what is truly amazing to me. I don't mean the good kind of amazement, either - I mean the wide-eyed, slack-jawed look of confusion and disappointment kind. Maybe we'll see some products later this year that will finally help Sony turn the corner to relevance in the US, but after so many false starts, it's difficult to be optimistic.

[Update: Winner!] Celebrate Mothers' Day With Samsung And Android Police By Entering To Win A ...