We've covered quite a few Bluetooth speakers here at AP over the last year or so – but we've never seen one quite like the BlackDiamond3 from Acase ($100, Amazon). Simply put, the BlackDiamond3 (known from here forward as the BD3) adds a pleasing visual element to your tunes by way of embedded LED lighting and multiple "diamond edges" that refract the over 16,000 colors to create a beautiful and ambient light show. In other words, it's really freakin' pretty. 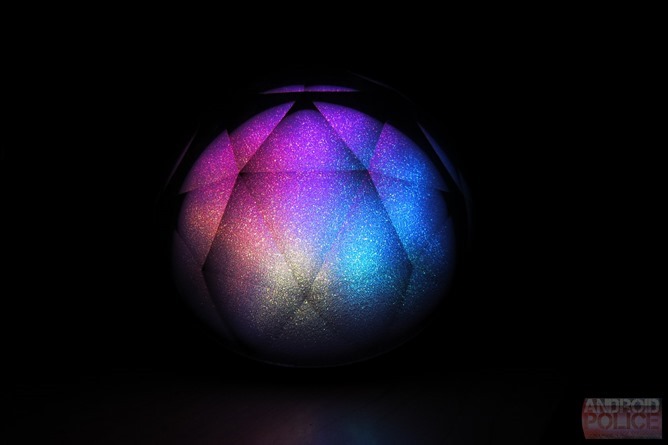 As pretty as it is, though, it's not perfect. But that's OK, you may still want it anyway.

Those are the basics covered in a nutshell. Now, please allow me to throw bullet lists to the side and ramble about this for a bit.

The top half of the BD3 is all about the show – that's where you'll find the LEDs and diamond-cut plastic shell. The unit is capable of producing 16,000 different colors, with different modes to show them all off. For example, you can set it cycle through multiple colors one at a time, and it will seamlessly transition between them. It's very relaxing to watch reds turn to orange to yellow to green to blue to purple to pink and so on. If you're more of a one color kind of person, though, you can "pause" it on any given color and it won't change until you "unpause" it. On the other hand, you can choose to have all the colors flow across the unit at once – they will merge in and out of each other and all around the upper half of the sphere. Lastly, you can choose to have the colors "bounce" and change with the tempo of the music in an almost strobe-like effect. Personally, that is my least favorite of the three, but I'm sure someone out there can appreciate it. Since text isn't enough to really demonstrate how good the BD3 actually looks, I made a video! Watch it here:

The bottom half of the sphere is all about work – this is where you'll find the speakers and the "bass resonant tube," along with a slot just for the remote. On either side you'll find the 3 watt speakers, and the bass tube is directly above the remote bay. Below that is the miniUSB port which is used to power the device. The bottom is coated in a non-slip rubber, so you can feel secure in tossing this badboy on a shelf without fear of it vibrating or shimmying off.

While the BD3 is designed specifically for Bluetooth connectivity, the included miniUSB cable has a bundled 3.5mm audio jack that allows it to be used with non-Bluetooth devices, further increasing its utility.

We've already gathered that it looks pretty – but how's the sound? Unfortunately, it looks a lot better than it sounds, which is disappointing. The tiny 3 watt drivers do their part in pushing out clean, undistorted tunes, but the unit overall is drastically lacking in low-end. Let's face it – little speakers like these just aren't made for pushing extreme amounts of bass, and the "bass resonant tube" just doesn't cut it. With that said, it's still very listen-able, especially if you don't necessarily enjoy genres of music that heavily rely on bass as a primary focal point. 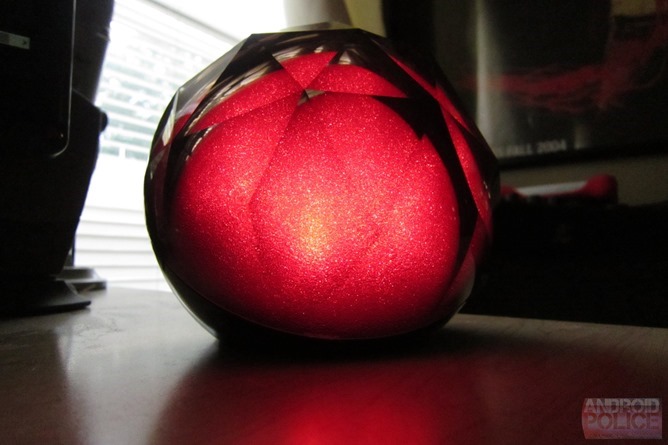 Ultimately, the BD3 is more about looks than functionality, and in this case that's not necessarily a bad thing. It makes for great ambient lighting (especially in a dark room), and with the right mood music could create a nice relaxing environment. The included remote is a nice bonus, as it not only lets you control the lighting sequence of the device itself, but the volume and tracks of the playing music as well.

On the downside, the unit has to be tethered to a wall outlet (or USB port) at all times, which is kind of a downer if you want a speaker with pretty lights anywhere outside of the house (this thing could be pretty awesome on a camping trip). If that doesn't bother you, though, I think it's easily worth the $100 asking price.