One of the most striking things about Glass is just how well put together the whole package is. Everything about the design, from the hardware, to the typography, to the cool little whoosh noises it makes just oozes polish. What's here is certainly not finished, but even in this state it is easily the slickest product Google has ever produced. Glass feels like the culmination of the new, design-focused Google. This is the company that made Google Now, and it is completely different from the company that shipped Android 1.0. 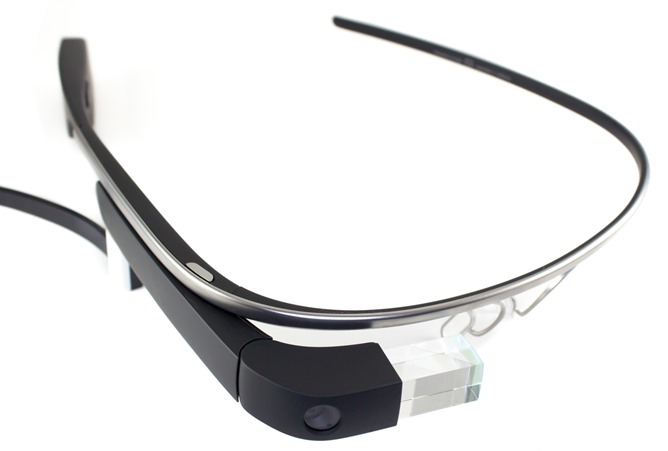 The display is unlike anything I've experienced. You can read about a heads-up display, and you can watch videos of it, but nothing really prepares you for the first time you strap on Glass and suddenly see the time floating in front of you. Think about it, when was the last time you saw a transparent display? When was the last time a computer screen was part of your vision? For most people the answer to this is "never." Glass is unlike any other piece of technology out there.

Everyone I show Glass to instantly starts smiling, and they usually give descriptions that involve phrases like "from the future" or "alien technology." Put Glass on your head for just a few seconds and you immediately realize what a landmark device it is. I've never seen a piece of technology that makes people so happy.

I really wanted to get a decent video of the display, but that's a bit of a challenge. A DSLR really doesn't fit inside Glass, so for now my solution is to record the screen from the front. Because of how the crazy prism works (magic) viewing Glass from the front means everything is mirrored and extremely tiny, so I recorded video of a backwards UI with a macro lens (which normally pumps out pictures like this) and flipped it later. So if you notice me scrolling in the wrong direction a lot, that's why. Just consider it a thorough demonstration of the bounce scrolling. So without further ado, a video:

For the record, the Glass display is crisp and clear with no pixilation, cameras just have a little bit of trouble with it. The only problem I've had with the display is the design of some 3rd party apps. The New York Times and Reddit occasionally run into white text on a white picture, which is... difficult. (but those apps aren't really any good anyway.)

I really like Glass, and I wish I could do most of my computing on it, but right now, finding an excuse to use it is tough. I would love it if I could read and reply to Google+ notifications, or use Google Talk, or Keep, or Calendar, or Google Reader a RSS app. For now though, it's just a text message machine and email reader.

What is here though, is really, really good. The form factor and interface is innovative and useful, and the UX team is absolutely killing it. The Glass interface feels like something from a sci-fi movie.

Google just needs to get all their services up and running on this platform so I can do stuff with it. There are a ton of things that Glass needs to fix, but I'll leave that for later. I'm having too much fun with these to care about any of that right now.

I'll go get to work on the review, which will be done when it's done, but I promise it will be worth the wait. Since most people won't be able to see or use Glass for an entire year, I'll have to be really thorough. It's also a totally new computing product, so some things will require a lot of explaining. If you don't have Glass and wish you did, or just want to know more about it, you'll really want to read the review. It will be the next best thing to owning Glass yourself. I'll go get to work.