How would you like to score a pretty sweet deal on a Galaxy S4? For today only, DailySteals is offering the international variant of Samsung's flagship phone for just $679. The same model appeared on eBay Daily Deals a couple of weeks ago for $700, but only stocked 200 units and sold out before most people could get their orders in. Amazon's current lowest price is $710 + $5 shipping. 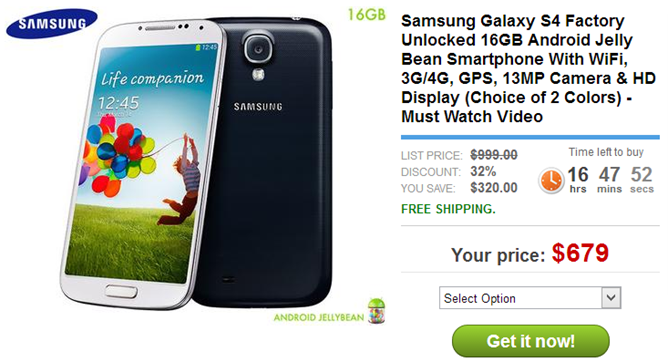 This is the factory unlocked international version, which means it isn't tied to any specific carrier. Keep in mind, this model doesn't work on CDMA carriers like Sprint and Verizon, and there is no support for LTE either. This version also differs from US variants by coming equipped with Samsung's octa-core Exynos processor instead of Qualcomm's quad-core Snapdragon 600. Take a look at David's review of the Sprint variant to get a pretty good idea of what you're in store for. Only the 16 GB version is available, but that probably isn't a deal killer since storage is expandable with a MicroSD card.

Daily Steals does not charge extra for shipping. Unfortunately, the deal-a-day site does not send packages outside of the United States. If you're ready to exercise your credit card on Samsung's latest and greatest, hurry over and get one before stock runs out on this offer, too.

AOKP's New Homepage Has More Swagger Than A Drunken Unicorn