A couple of months ago, a number of team Hacksung/CyanogenMod members expressed frustration and doubt regarding the fate of the popular custom ROM when it came to Samsung's newest flagship - the Galaxy S4 (see our review). Other CM members quickly put an end to the misinterpretation, but not before some prematurely jumped to incorrect conclusions. Needless to say, when Steve Kondik, a.k.a. Cyanogen, took to G+ to announce the first upcoming S4 builds, he couldn't resist the opportunity for a healthy dose of sarcasm: 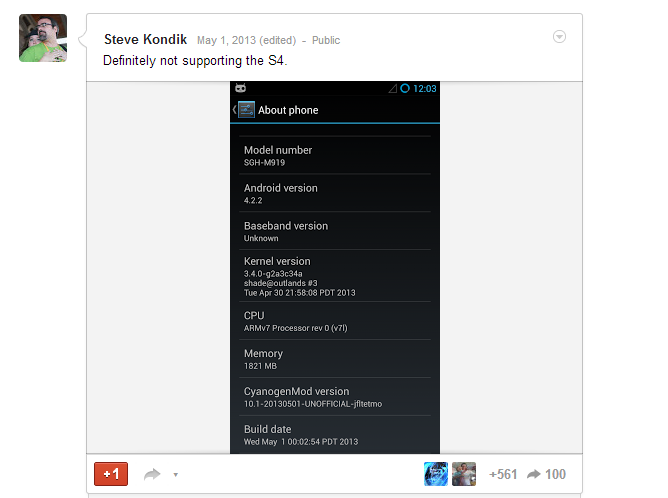 His follow-up messages confirmed that the T-Mobile and Canadian S4s were first in line, followed by the international i9505 at some point in the future when the team gets a hold of the hardware, though it's not clear whether the i9500 or other Exynos Octa variants will be supported. Samsung already released kernel sources for all of these devices earlier in April.

We didn't have to wait long as the first CM 10.1 builds for the T-Mobile (SGH-M919) and Canadian (SGH-i337M) S4s are now available for flashing from CyanogenMod's download site:

Note: The "EXPERIMENTAL" part of the file name is normal for on-demand builds that were triggered outside of the normal nightly schedule. This happens for initial snapshot builds a lot when they're first released so that we don't have to wait half a day for the next scheduled build time.

According to Steve, "there are a few rough edges still, but will be ironed out in short order and you should be able to use it as your daily driver without serious issues."

If you're a developer interested in building or contributing to CyanogenMod for these devices, the relevant source trees are located at: 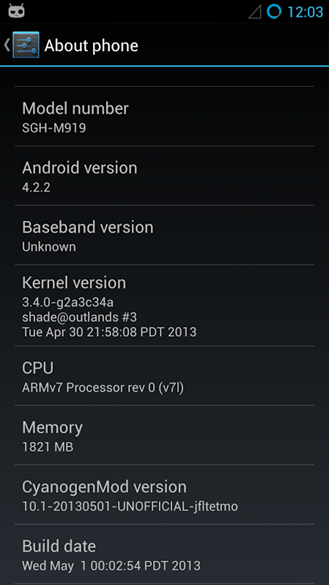 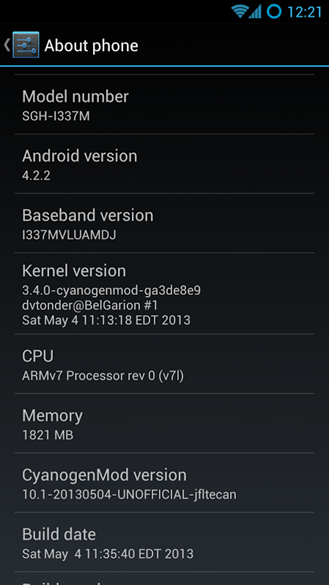 Note: The screenshots were taken before the builds became official, which explains the UNOFFICIAL part of the version

Of course, the Verizon version isn't even out yet, and the AT&T one is locked up, with kernel sources MIA. As I sit here shaking my head at AT&T, we're stuck in limbo waiting for the unofficial unlock to be released by Dan Rosenberg. Until then, you probably shouldn't count on any action from CyanogenMod or any other ROM developers.