Everyone who's interested in a tablet that's slightly bigger than the Nexus 7, with a low-resolution screen, plastic construction, and lower specs, raise your hand. It's OK, we'll wait. Anybody? Not even if it bears a striking resemblance to a certain fruit-branded tablet? Acer's hoping for a more fervent response in June, when it plans to release the Iconia A1, a 7.9-inch WiFi tablet with an unusual (for Android) 1024x768 4:3 screen and a 1.2Ghz MediaTek quad-core processor. The 16GB model will have an MSRP of $199.99, but some outlets are already reporting retail prices at $179.99. 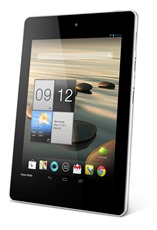 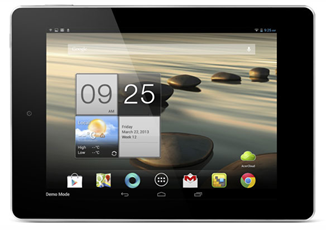 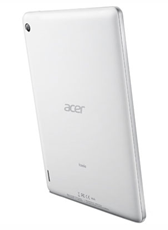 Despite the lackluster screen and derivative looks, the A1 isn't all bad. It will launch with Android 4.2, something that Android software aficionados will appreciate, but of course a few Acer-designed apps are thrown in as well. These including the Digital Hub photo sharing/editor app and a touch to wake function. It also packs a 5 megapixel rear camera/.3MP front camera with an open MicroSD card slot, and a smallish 3250mAh battery. Perhaps the one hardware feature it's got against similarly-priced competitors is a MicroHDMI port right on the device. Acer's press release mentions a model with 8GB of storage (the 16GB model is the A1-810) but does not say when it will be released, or for how much. $149 seems like a good bet.

Here's a video full of attractive people staring at a tablet box. Maybe if you buy one, attractive people will stare at you - though they're more likely to ridicule you for taking pictures of your meal for one.

If the A1 seems familiar, beyond its obvious Cupertino influence, a 3G version was already announced for Europe and other territories. The Iconia B1 was shown at CES with basically identical specs and a 3G SIM card slot, but there's no indication that this more flexible model will be headed stateside. The B1 has an MSRP of €199 (about $260).

Acer today unveiled the Acer Iconia A1, the company's first full-featured 7.9-inch tablet targeted at modern day explorers, adventurers, digital freaks and mobile executives requiring an all-day mobile companion. Thanks to a sleek and light-weight design that is comfortable to hold in one hand, it also easily fits into a purse or bag. The new Acer Iconia A1 keeps people entertained and connected with smooth and speedy navigation, browsing and media playback powered by a fast quad-core processor.

The Acer Iconia A1 was introduced today with other new products, including the Acer Aspire R7, Acer Aspire P3 Ultrabook and Aspire V Series touch notebooks. The new line of Acer mobile products highlights the company's focus on redefining the computing experience through progressive design. #AcerTouch.

"Tablets are becoming cherished companions to many people as they stay connected and entertained throughout their day," said Sumit Agnihotry, vice president of product marketing, Acer America. "We want everyone to experience that. Everything that makes tablets so enjoyable is even better on the perfectly-sized Acer Iconia A1. The design is comfortable to hold, while the sleek build makes it a natural extension for anyone who wants to keep their digital life right at their fingertips."

Busy mobile users get the prompt performance they want with smooth video playback, and fluid and fast navigation through apps and websites powered by a fast MediaTek Quad Core 1.2GHz processor. Gestures, zooming, scrolling and navigation are all intuitive, and games are responsive, realistic and even more fun with the integrated gyroscope for movement and vibration responses.

The LED-backlit display with IPS technology and a 170-degree viewing angle vibrantly highlights videos, photos and multimedia content in accurate color and brightness. The 1024x768 resolution makes text and graphics crisp and clear, while the 4:3 aspect ratio is great for web browsing and e-reading as well as gaming.

Acer's new Touch WakeApp® gesture gives customers one-touch express access to their favorite apps directly upon waking from sleep. The Iconia A1 delivers the Google experience with services like Google Now, Google Search, Gmail, YouTube, and great content such as magazines, movies, games, books and more than 700,000 apps from the Google Play Store.

Starting at only 0.90 pounds and measuring only 0.44 inches thin, customers will also enjoy taking it with them for navigation and location-based apps via the built-in GPS.

The Acer Iconia A1 keeps consumers connected to Wi-Fi networks and hotspots with reliable 802.11b/g/n wireless technology. Plus, the integrated Bluetooth 4.0 lets consumers quickly connect the tablet to a variety of other devices, such as headsets and printers.

The 5MP rear-facing camera captures 1080p video at 30fps that can easily be edited for quick sharing on-the-go. The front-facing camera pairs with the enhanced microphone to capture video and audio clearly for video chats and recording. The micro USB 2.0 and microHDMI port enable quick transfer or sharing of customer's photos, music, videos and other digital content.

Available as 8GB or 16GB2 version with the option to add an additonal 32GB2 via microSD, the Iconia A1 is the ideal digital companion for people which are constantly up and about.

The Iconia A1-810 with 16GB capacity will be available in June at a Manufacturer's Suggested Retail Price of $199.99 USD.

Reddit Gets Its Own Google Glass App, Sets Record For Most Brilliant Stupid Idea

Carmageddon For Android Will Debut May 10th, Free For The First 24 Hours