A couple of days ago, we found out that LG's latest powerhouse, the Optimus G Pro, is going to be exclusively available on AT&T in the United States. We had our eyes on this device ever since David reviewed the Korean version and found it "decidedly superior to the Galaxy Note II in many ways."

The 5.5" 1080p device packs a competitive Snapdragon 600 clocked at 1.7GHz, 2GB of RAM, 32GB of internal storage, 13MP/2.1MP cameras, and a 3,140mAh battery. Not bad, right? The only thing it seems to be missing compared to its two major competitors, the HTC One and the Samsung Galaxy S4, is 802.11ac Wi-Fi, but chances are that by the time you are able to fully utilize that kind of speed, you'll be due for an upgrade. 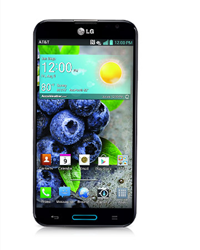 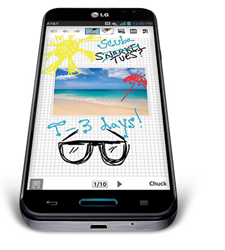 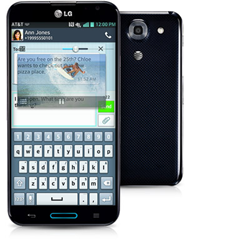 But back to the news at hand. As of a few minutes ago, the G Pro is available for pre-order from AT&T's site for $199.99. It ships on May 7th, three days ahead of in-store availability date of May 10th. I'm not sure why you would get a G Pro over an HTC One or an S4 as LG doesn't quite have the best track record when it comes to upgrades, but maybe that nice, large Note II-sized screen is going to win some of you over. 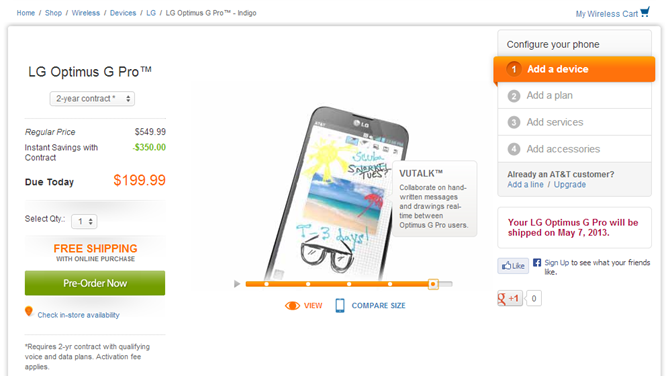 If you decide to order, don't forget about AT&T's current $100 trade-in offer which would knock the final price down to a more manageable $99.99. In fact, according to our AT&T rep, you can stack multiple trade-ins, though I'm personally not 100% convinced that's going to work. If you do try to trade in more than one phone, feel free to let us know if things go smoothly.

Barnes & Nobile Announces Google Play For The Nook HD And HD+, Inches Them Closer To 'Real ...