It was only yesterday that Cyanogen definitively confirmed AT&T's treacherous move to lock down the Galaxy S4's bootloader, but there is light at the end of that tunnel. No thanks to AT&T but to security researcher extraordinaire and a person I admire Dan Rosenberg, a.k.a. the magician, a.k.a. the root whisperer.

Dan, who is responsible for numerous root and unlock exploits, tweeted this photo of his Galaxy S4 earlier today: 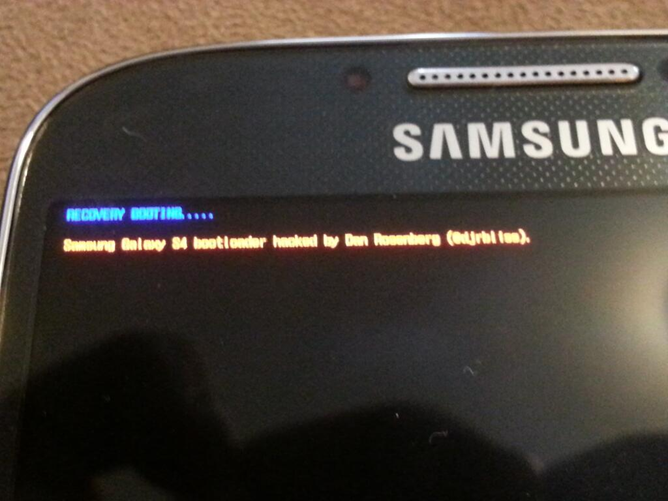 There are no instructions or blog posts explaining the unlock at Dan's blog yet - these should be coming in the future. When, you might ask? This part is not decided just yet, for a good reason (put down your pitchforks). Here's what I was able to find out:

So there you have it - the GS4's bootloader has been unlocked but now we have to practice some patience and try to not feel selfish. Those who wait will be rewarded with custom recoveries, ROMs, and possibly unicorn ponies.

Update: Dan took to xda to publish a brief Q&A:

Some of you may have seen a picture I posted earlier. In case you missed it: https://twitter.com/djrbliss/status/329617760252481537
I thought I would answer some of the more common questions I've been receiving.

Is that the AT&T-branded Galaxy S4?
Yes. It wouldn't be very interesting otherwise. ;-)

Does this allow you to run custom kernels and recoveries?
Yes.

When will this be released?
I will not be publishing anything at least until the Verizon-branded Galaxy S4 begins shipping (late May).

Will bothering me result in an early release?
No.

Is this the result of a leak?
No. I would not associate myself with the publication of confidential materials that are proprietary to these companies, regardless of the fact that I disagree with their policies on device openness. Plus, where's the fun in that?

What about the bounty?
Feel free to wait until I publish and decide for yourself if it meets your criteria. As always, I prefer any donations go to a reputable charity organization instead of me, but I won't refuse if you insist on throwing money at my PayPal (http://goo.gl/zBGb0).

Is it safe to install OTA updates?
If you are interested in taking advantage of this release, it is recommended that you avoid installing OTA updates until it is published. Please be aware that refraining from installing updates may prevent you from receiving security and stability fixes for your device, and consider whether this is a risk you are willing to accept.