A lot of our readers have made the jump to Google Keep for their task/to-do manager of choice, but the older and more feature-filled Astrid still has a wide and appreciative community of users. Today the cross-platform service announced that it's been purchased by Google's ancient and somewhat diminished rival, Yahoo. While details on price and timeline are scarce, the service blog notes that they're no longer accepting premium subscriptions (which added data storage and saved voice notes) and will be issuing refunds to those who have paid for subscriptions and plugins. 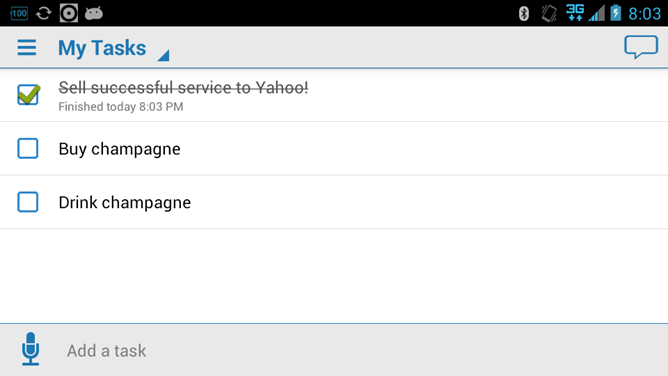 Also of note: the blog post says that Astrid will "continue to work as is" over the next 90 days, implying some kind of change thereafter. Astrid isn't saying whether that means a complete shutdown with a replacement app from Yahoo, or a more gentle transition into a Yahoo-branded version of Astrid. In either case, they've stated that there will be some way for users to download or export the data they've input into the service.

While it seems pretty clear that Astrid isn't going to continue in its current form for much longer, it's unlikely that Yahoo will do away with the impressive progress the developers have made over the last three years. The app has a great set of features and about four million total users between Android and iOS, and that's not something that Yahoo can afford to ignore. It's also a safe bet that the app will stay on Android in some form or another. Congratulations to the Astrid team on the buy - here's hoping there are even better things in your future.