For many people, a piercing alarm is the worst way imaginable to wake up in the morning. One moment you're in deep sleep, moments away from taking a battle axe to Bowser and rescuing Princess Peach in a lime green Lamborghini, the next you're covering your ears as a neglected smartphone wails from the side table nearby. It's bad, but it could be worse. Much worse. Spin Alarm Clock won't settle for mere acknowledgment to cease its unpleasant alarm, it demands you to spin around several times before accepting that you are, in fact, awake.

Spin Alarm Clock doesn't look all that different from Android's default alarm clock application. Sure, it's brighter, but it still adheres to Android's Holo design interface, and the functionality is largely the same. If you rely on an Android smartphone as your daily alarm clock, you will already know how to work your way around this app. The Quick Alarm button in the bottom right is a new addition, and it allows you to create an alarm in just two clicks. It's really convenient for trying to squeak a 30 minute nap in between classes. 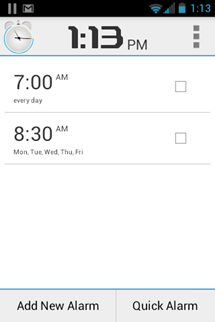 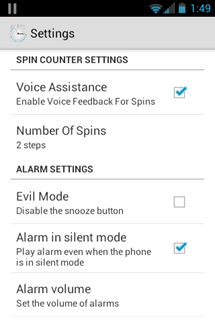 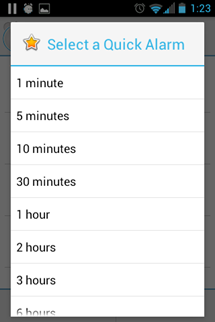 What makes Spin Alarm Clock special is that it cannot be disabled with a simple swipe. You will have to get out of bed and spin around a few times before the alarm will cease. For those of you who are tired of missing work because you constantly sleep through your alarm, this may be an attractive premise.

When the alarm goes off, a screen will appear with two thumbprints on which you are to place your thumbs. A female voice will give you instructions, likely a necessity at 6 in the morning when your eyes are still refusing to cooperate. Once you spin around a pre-determined number of times, the alarm will finally fade. At this point, you are more than likely awake. 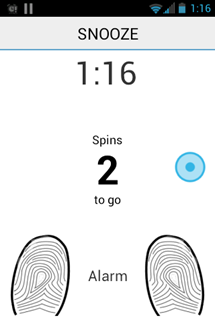 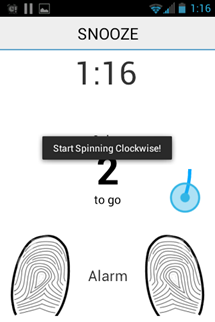 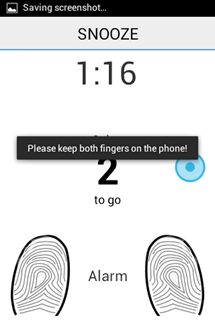 Even if you are awake, you will probably be so dizzy that you fall back in bed. Sleep will seem like the best way to get rid of your nausea, and you might need another alarm to alert you that you passed out again. Just don't use Spin Alarm Clock to bring you that alert. You might never make it in to work on time.

Really, I'm being generous. I'm assuming that you will have better luck than I did and actually manage to turn the alarm off. I had no such success. I spun around dozens of times, but the number of "Spins to go" never dropped. I couldn't get the on-screen indicator to show that I had completed more than an eighth of a spin.

A dozen spins later, I saw no improvement. When I needed to catch my breath, I pressed the snooze button and prepared myself for the next round of spinning. I never figured it out, and when I was tired of trying, I just pressed snooze and deleted the alarm. I'm pretty confident I would just snooze-delete were I to actually use Spin Alarm Clock to wake me up in the morning, at which point I might as well go back to using the default alarm clock.

Spin Alarm Clock made me feel sick and cranky after using it. This was not a pleasant experience, and I can think of no better way to begin each day on the wrong side of the bed. If the default alarm clock that comes with Android really doesn't cut it for you, consider checking out the beautiful doubleTwist Alarm Clock. In the meantime, I'm still waiting for the world to stop spinning.

Samsung Galaxy Note 8.0 Book Cover Review: Very Nice And Too Expensive, Just Like The Tablet Inside