I picked up Samsung's official first-party cover for the Galaxy Note 8.0 shortly after getting the tablet itself, because Samsung's plastic body doesn't inspire confidence, because all tablets scream out for an easy freestanding solution, and (not least) because it was the only option right after release. The case hits all the high points: good protection, a built-in stand, and a magnet to activate the screen's sleep feature. The only major downside, like the tablet itself, is the price. 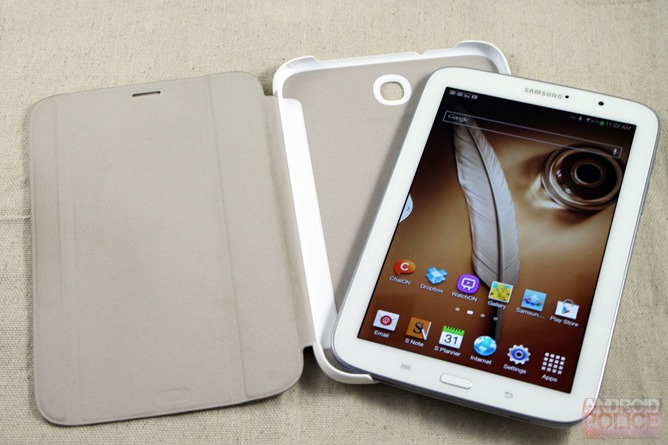 In many ways, the Galaxy Note 8.0 Book Cover Stand Case is a microcosm of the hardware it protects: nice enough, good at what it's supposed to do, way too expensive, and dreaming of the day it's a phone cover. But at the moment the only alternatives are the legions of pleather quickie cases littering Amazon and eBay, so it's probably the best choice. And if you've already spent the considerable dough for the Galaxy Note 8.0, you might as well shell out another fifty bones for the cover.

Unlike the Galaxy Note II and Galaxy S III, the Note 8.0's battery isn't removable, so this is a full case instead of just a flip for the screen. The outside of the book cover is coated in a pliant plastic. the top is slightly soft, the back is harder than the tablet's own body, and all of it is covered in a diamond pattern. This gives the case a nice grippy feeling, making it much, much easier to hold than the slick plastic the Galaxy Note 8.0 is made from. Inside the case is coated in a thin layer of felt, protecting both the back and front from scratches. A couple of thin rubbery feet sit on the right side, keeping the tablet upright when the stand/cover is deployed.

Speaking of the cover: there are two things you'll notice about it. One, it's trisected, and not in the usual equal segments. Two, there's a hole in the top. Just below the edge, you can see a little window, with the Samsung logo on the screen barely visible like the patty in a Quarter Pounder. 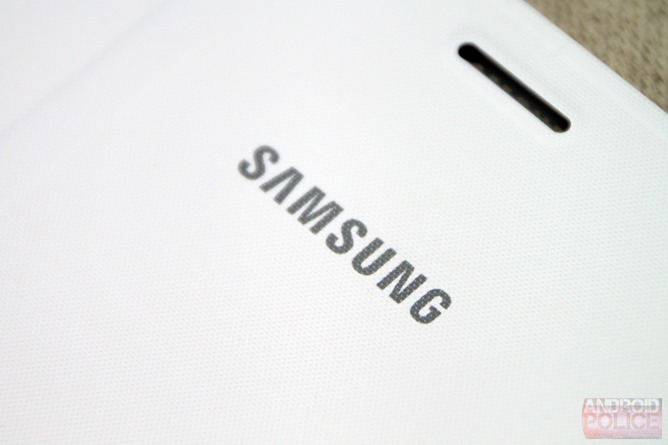 If you're wondering what the point is, recall that the international Galaxy Note 8.0 comes in both WiFi and 3G versions. The latter is essentially a gigantic smartphone, complete with a slightly ridiculous earpiece above the screen, which the WiFi version lacks. Apparently Samsung didn't think it was worth making a second version and released the "phone" cover here in the United States. How about that. 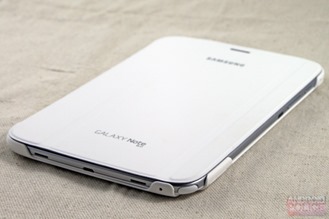 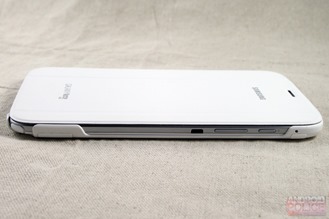 Anyway, the cover's got a good build, and impressively only adds a few millimeters of thickness to the tablet when it's in place. It's better than anything you're likely to find for the moment, unless quality brands like Incipio decide to start production. And given the Note 8.0's limited target audience, I wouldn't hold my breath for that.

The most useful feature of the Book Cover is its ability to double as a stand. Flip the cover around the back and fold at the fist section, and the final, skinny section will automatically grip the back lightly, thanks to a surreptitious magnet. It holds the tablet at about a 15 degree angle. With the magnet, the felt, and the plastic feet, it's unlikely to move if you don't want it to, even with extended use. 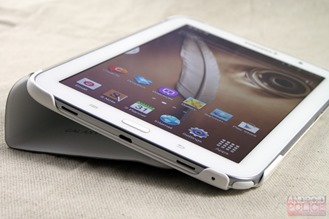 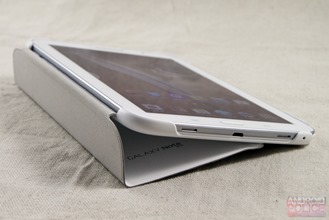 Fold the cover flat on the back and kick out the middle section, and you can prop the tablet up at 60-70 degrees. This is much better if you're reading or watching a movie. The design has been used on previous official Samsung cases, and while it looks a little precarious, it holds up fine even with firm taps. You can work with the cover for a bit of give and take in the display angle. In this configuration, it's basically impossible to reach the power and volume buttons. 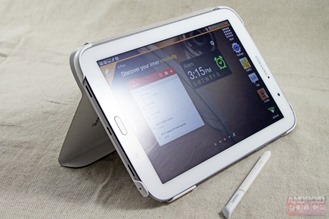 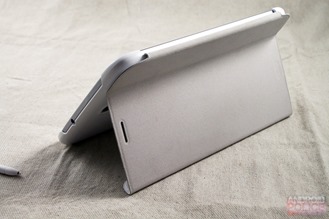 The cover also has an integrated magnet facing the screen on the far left side, mated to a magnetic sensor in the screen itself. This lets the tablet automatically wake when you remove the cover, in the style of iPad covers everywhere and the better class of Nexus 7 case. It works well enough, and has the added advantage of keeping the cover from sliding around too much without any clasp mechanism. 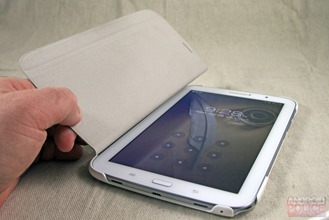 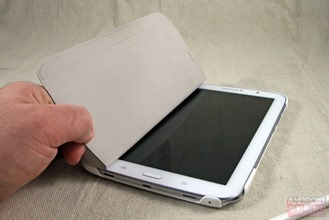 There aren't any cutouts except for a few pinholes for microphones, and only grips on the four corners. This leaves the top, bottom, and right side mostly open, but it covers up the important impact points (with the exception of an opening for the S-pen stylus) while leaving the ports, speakers, and buttons free. The only useful part occluded is the MicroSD card slot, which is on the fold side and wouldn't be easy to get at anyway. A slightly raised cutout on the back covers and protects the camera without getting in its way.

Aside from the somewhat ridiculous price of fifty dollars American, there aren't a lot of negatives to the official book cover. It's light, good-looking, and adds some much-needed protection without too much bulk. But this wouldn't be much of a review if I didn't point out any flaws. The strength in the back magnet is pretty low, making the cover slide around a bit when it's folded. The felt lining the inside of the cover is also very, very prone to dirt and fingerprints, making it look noticeably grody after just a couple of weeks. But that would probably be true for any similar case. Again, note the inaccessible power and volume buttons when in stand mode. 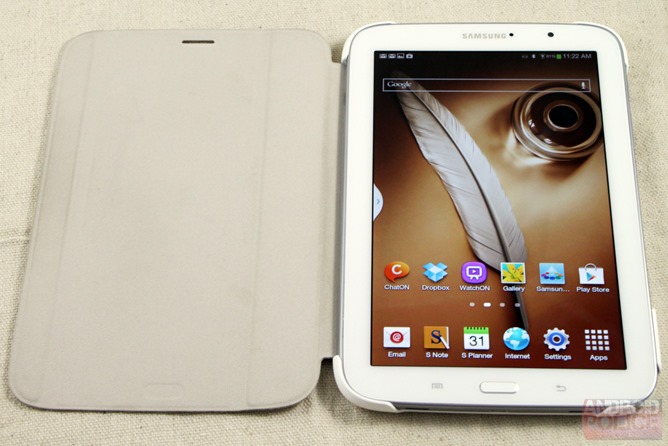 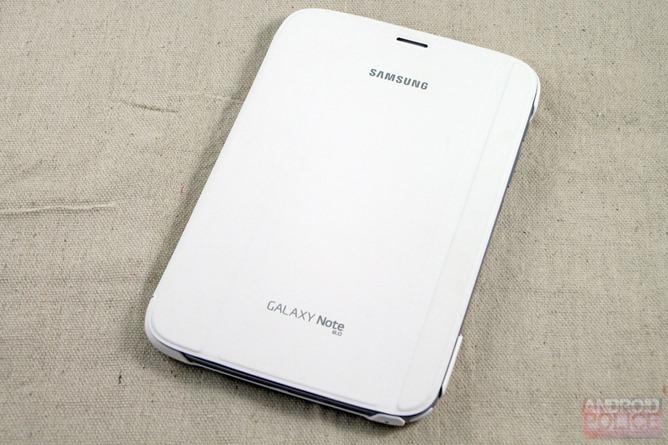 The Samsung Galaxy Note 8.0 Book Cover Stand Case is available in white, grey, and green, though it seems to be in short supply in some places at the time of writing. it retails for $49.99 in the United States.