Changing ecosystems is hard. You have to download your apps all over again and if you're going to a platform that's not made by Google or Apple, you have to wonder whether or not you'll even have your apps available to you. Well, thankfully, Microsoft has stepped in to provide a tool for users to find out whether or not you'll be covered if you switch. I tried it out and guess what it found? 92% of the applications I use are available on Windows Phone! Except... 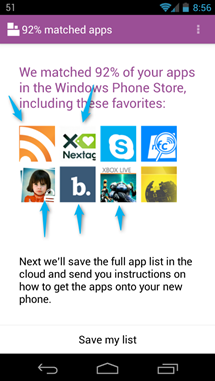 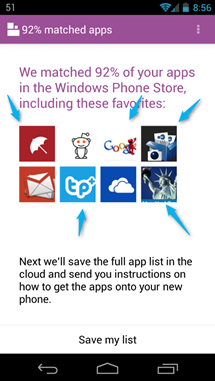 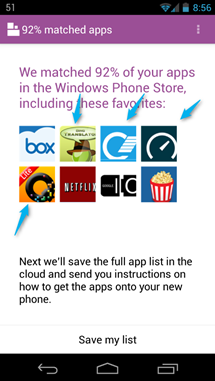 Yes, Microsoft insists that a full 92% of my apps are available on Windows Phone. Except, out of the rotating slideshow that I get of "these favorite" applications, a sizeable portion of them are completely foreign to me. I definitely don't have anything related to Xbox Live on my phone. And...is that Elmo? What the heck is Elmo doing on the Google logo? What are these apps?!

As if that wasn't bad enough, for the most arbitrary of reasons, the app simply will not conduct its search if you have less than 50%  battery. As you will notice in my screenshots above, I was at 51%, just barely scraping by. A little bit later at 47%, I got the following notification: 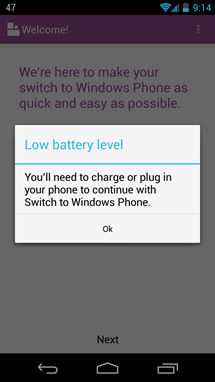 Geez, Microsoft. I mean, yes, I have a Galaxy Nexus, and yes the battery life is abysmal, but it's not that bad. I can see your point, though. I wouldn't want to interrupt the delicate process of a snake oil pitch in the middle. That could cause serious problems on the Android phone that I'm definitely not going to be leaving any time soon.

In seriousness, though, Microsoft, come on. I actually own a Windows Phone and despite it being old, completely incapable of running WP8, and lacking a large number of necessary apps, it's not bad. This weird, childish Android trolling isn't making you look better. You're capable of genuinely good marketing and developer outreach. I want to see Windows Phone mature into a solid OS. Please stop doing stuff like this. Or at least do it well.