Back in early 2012, if you would've said the name "Fuhu" to me, I would've paid no mind to your gibberish and went on about my business. Then in June I got my hands on the nabi 2 – a tablet designed specifically for children – and it put Fuhu on the map in a big way (for me, at least). For $200, the nabi 2 was (and still is) a seriously fantastic piece of hardware for the child in your life. And we're not talking about some Playskool garbage, either – it's the real deal. A full Android-powered tablet featuring an NVIDIA Tegra 3 processor. It's no joke. And that's just what's on the "surface" of the tablet – the raw data. What Fuhu did with the software really blew me away; the educational aspect of the device is absolutely second to none.

But that's enough reminiscing about the nabi 2. This isn't about reliving what Fuhu did with the 2. This is about its little brother, a tablet designed for Pre-school aged (and younger) children. Meet the baby of the nabi family: the nabi Jr.

With any device like this, a little bit of resistance is expected. Why does a three-year-old need a tablet?! some people may say. Well, it improves motor skills for one. More so, however, this is the direction schools are moving. My oldest son uses iPads and iPods (*grumble*) in class basically every day. And that's not just him, either – his entire school is like that, even the lower grades like first and second. Ensuring a child is prepared for whatever the immediate future may hold is never a bad thing. But I don't want to open the floor for a "good parenting" debate right out of the gate. That's not what this is about.

This is about the nabi Jr., how good it is, and at what age you may want to consider something like this for your little one. With that, let's take a closer look. 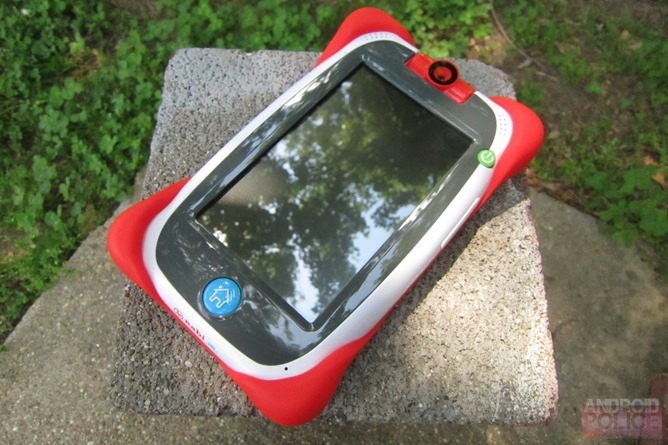 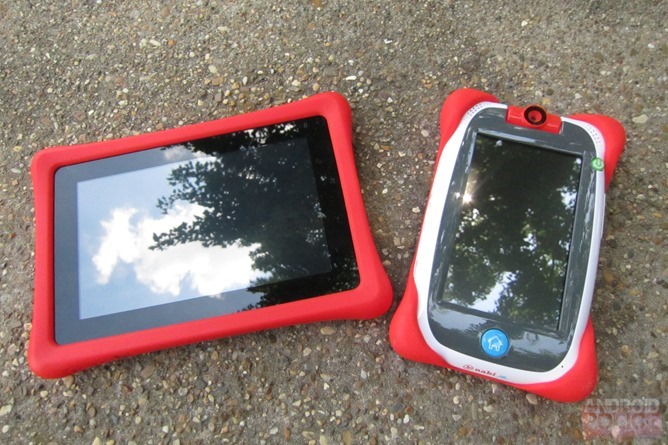 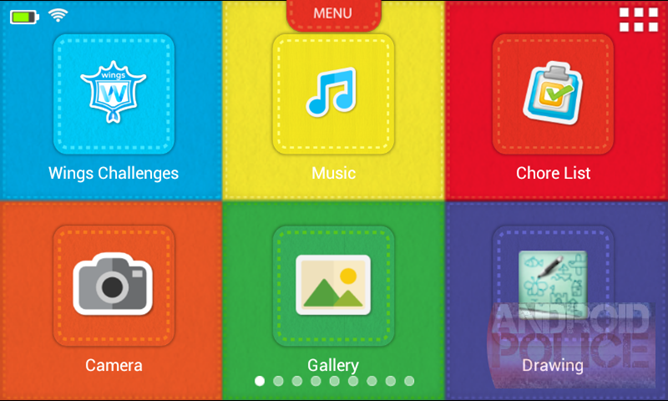 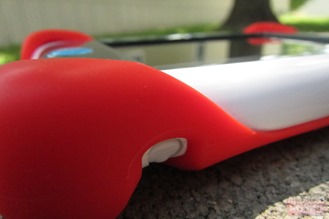 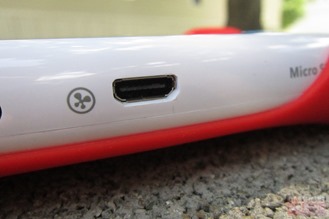 With the most obvious stuff out of the way, I want to jump right into some deeper thoughts about the nabi Jr.

I've been a big fan of Fuhu since the nabi 2 – in fact, my daughter and youngest stepson have that device. Thus, I was pretty excited to hear about the Jr., the perfect "first Android device" for my youngest son (14 months at the time of writing this). After spending the last few weeks playing with the device and watching him interact with it, a couple of things are apparent to me: 1. this tablet is built to take a beating, and 2. 14 months may still be a little bit young for a tablet. The latter has also helped me see how well thought-out this device is, however. 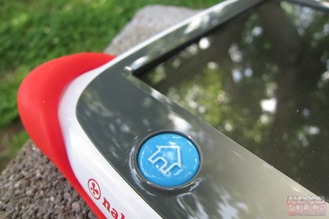 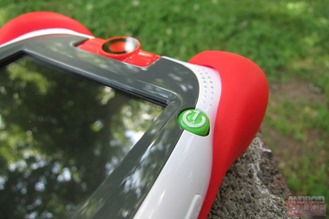 For starters, the physical design of the nabi Jr. is outstanding. It's bulky by normal standards, but I think that just helps small children better hold on to it. The protective bumper is made from a food-grade silicone (much like the one on the nabi 2), so even when your little one decides to relieve their aching gums on it, you don't have to fret. The power and home buttons are also oversized and easy to press, which is one of my favorite things about the Jr.'s physical design. My son happens to love buttons, so he spends and ample amount of time pressing both the home and power buttons repeatedly. They're easy enough for him to press with little effort, and large enough that he can easily accurately navigate his little finger to them. That in itself is helping improve his motor skills. Around the outside of the device you have the volume rocker and a stylus bay (stylus not included for some stupid reason) on the right side (when held in portrait), the proprietary charging port, headphone jack, and microSD card slot (which is cleverly hidden beneath the silicone bumper) on the left side, and the rotatable camera at the top. The speakers are located on the front of the unit (can we just have this on all devices now, please?), directly above the display (again, in portrait), flanking either side of the camera. 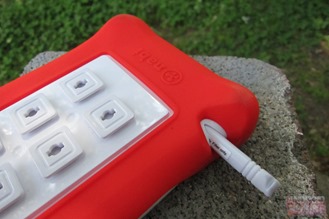 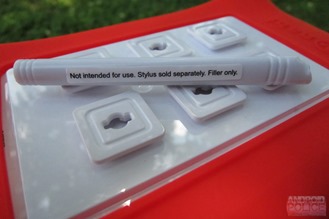 This brings me to one annoying issue that I have with the Jr. – the layout is confusing. As soon as you look at the device, you'll grab it, hold it portrait mode, and turn it on. Guess what? The UI shows up in landscape. Neither the lockscreen nor the nabi UI will run in portrait mode. Many of the apps do; but the primary interface doesn't support portrait. It always baffles me when device makers design a product's software to be used with one orientation in mind, but the hardware suggests otherwise. Cohesiveness is a good thing! Aside from that "issue," I rally like the Jr.'s design. It's great for little hands.

The camera locks in at three angles: front, top, and rear

One thing I really enjoy about the Jr. is the camera. I know I already mentioned it earlier, but I feel like such a cool feature really deserves more attention. The camera isn't good because of its picture quality (far from it, actually – they look like complete crap); instead, the fact that it's both a front and a rear camera is what makes this special. I've never met a kid who doesn't love to take pictures – the Jr.'s camera lets them easily flip it to the back and do just that. But then when they want to video chat with grandma, grandpa... or whoever else, simply flip it back to the front. It's actually quite brilliant. And really, since it's for a child, the picture quality doesn't matter in the slightest. They'll just be happy to get some shots (and maybe even a few selfies).

When it comes to software, most of it is over my son's 14-month-old head. That makes sense since the packaging clearly specifies that it's designed for three-years-old and over, so I'm definitely not knocking Fuhu in that respect. Still, my little one loves to fling the screen and watch stuff move around. Even though it's not really made for his age range per se, he also enjoys it when his mother and/or I show him some of the apps – like "Learning Animals Sounds," for example. He can't navigate the interface himself, but that doesn't mean the device isn't still a great learning tool for his sponge-like mind.

And that's really what this tablet is all about. It's about learning and development. Where the nabi 2 is geared towards helping children hone their skills in various subjects, the Jr. is about helping toddlers and other pre-school age children improve their motor skills, understand basic principles like cause and effect, and learn things like the alphabet and types of animals. But it's also so much more – it's a gateway into another world of learning. A tool that takes the place of dozens of other items – a Swiss Army knife of educational software. I wish the Jr. existed when my other children were younger.

It covers a really wide range of age groups, too. As I said earlier, the device itself is geared towards 3-6 year olds – but that doesn't mean it doesn't work well for younger children, too. For example, there's an app that can help your child learn the alphabet, which is great for even the youngest of little ones. But there are other apps made specifically for older kiddos, like "spot the difference." There really are a lot of of bases covered under this $99 umbrella.

Here's a list of the software included on the Jr. right out of the box (No, those aren't typos – there are a few apps with the same name):

And those are all aside from the software that's part of the nabi UI, like the Chore List  and Treasure Box for example.

While it may pack quite a few apps, the software suite itself is a watered-down version of what's available on the 2 – some of the apps still make an appearance, but things like Spinlets+ Music, a customized web browser, Fooz University, and Websites, Videos, Crafts, and Books are missing. Given the age range this device is built for, however, that makes sense. A three- or four-year-old has no use for a web browser or book application, so I only mention the absence of these apps because I'd be remiss not to.

Just like on the nabi 2, there's also Parent Mode, which is where all the tablet's administration is handled. Parents can install new apps, edit the Chore List/Treasure Box, add/remove apps from nabi mode, and access the full gamut of settings. Essentially, this is stock Android – though it's a little... odd. The status/navigation bar uses the tablet-style layout, but the launcher uses the phone theme. Needless to say, the tablet launcher just doesn't work on a 5" 800x480 display – hopefully this is something Fuhu will fix in a future OTA. Fortunately, you shouldn't have to spend too much time using Parent Mode, so the interface is almost a moot point.

Ultimately, I think Fuhu has knocked it out of the park once again. The nabi Jr. is the perfect precursor to the nabi 2 for your little one, and at $99, it's not a budget-breaker. The amount of utility that this device can provide your pre-school aged child is invaluable – it not only helps with basic motor skills and hand-eye coordination, but has clutch learning tools that will help prepare your little one for what awaits them in school and beyond.

And while $99 isn't a lot of money per se, I feel comforted by the fact that, with proper care and supervision, this device should last my son for several years to come. The software will grow with him, and the Amazon Appstore is chock-full of educational apps that can easily be installed. It's a win-win.

As always, if you have questions, drop them in the comments and I'll do my best to answer.