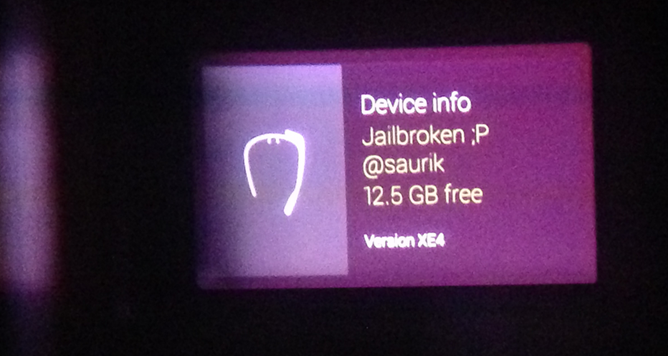 Understandably, this idea was a bit bedeviling to the press – ostensibly, Glass is a relatively limited platform for developers, who can only write apps using a web-based API, allowing software to be integrated with the device over the internet. Eric Schmidt's words regarding the relative closed-ness (or at least, less-than-total openness) of Glass' platform to start were still wet on the page. To make matters worse, comments came at rapid pace from the press and from Googlers regarding the situation that may not have been detailed enough to keep cursory readers up to snuff on what was really going on.

In what can only be accurately classified as an epic post to his blog, Saurik (aka Jay Freeman) has detailed the entire story, from his initially fiddling with Glass straight through to the process' possible security implications, and the security risks inherent in a new device like Glass.

In his post, Saurik explains the process of getting root access on Glass, first addressing the catch-22 that would be using fastboot, to exploring a 4.0.x exploit initially implemented by hacker Bin4ry, to how to use the exploit with your own Glass unit (assuming you're lucky enough to have one already).

For those with dreams of unlocked bootloaders, Saurik offers words of caution. In the post, he outlines the security risks of unlocking your bootloader in general (if left alone for even a short period of time, someone could tamper with your device in a way that would be more than a little harmful). Saurik expounds on this idea, noting that – should the worst happen – someone could gain access to your Glass and, by extension, your eyes and ears. While doing something like that would take a certain amount of effort, Saurik suggests Google add some protection to Glass that's at least marginally, well, extant (like a PIN unlock, or a sliding camera shield that says to viewers and users alike I'm not recording).

For the full scoop, grab a cup of coffee and head to the source link below. While long, it's a great read for anyone interested.