While Sprint has yet to announce it, an OTA update has begun pushing to its version of the Galaxy S4 (model SPH-L720), build number L720VPUAMDL. The version the device shipped with was L720VPUAMDC. There are no immediately apparent changes in the new build, though I do think the lockscreen animation is a little snappier than it was before. Then again, it's easy for that sort of thing to be placebo. 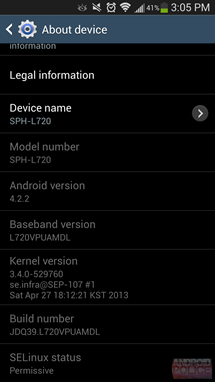 The update is around 30MB in size, and the fact that it's already pushing out means most customers will probably receive a notification to install it the moment they power on their devices. Like I said, it really doesn't seem like this update does anything obvious. More than likely, Sprint or Samsung were slightly behind schedule preparing the final retail software for the S4, and they've just now got around to pushing it out.