If you've never heard of Japanese manufacturer NEC, don't worry, you're in good company. While the corporation has indeed been producing Android devices for years, some of which are quite unique and impressive, they haven't seen fit to expand most of their mobile hardware beyond Japan. (Note the complete lack of cellular devices on NEC's American page.) That's why it's so puzzling to see noted tipster @evleaks' latest break: the NEC Terrain for AT&T. The phone would be NEC's very first Android phone to hit America's shores. 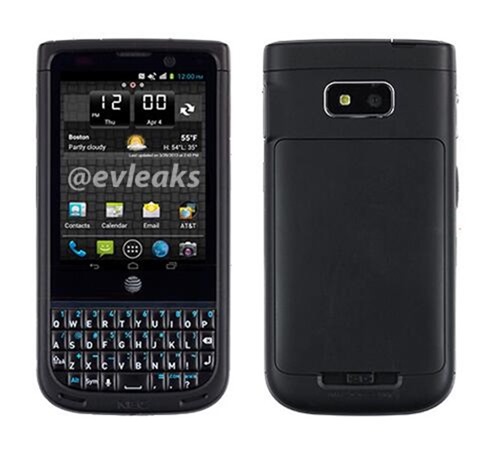 Even more interesting is the fact that it appears to be a budget-focused candy bar phone with a full QWERTY keyboard. Android devices naturally lend themselves towards big screens, and the Blackberry-style formation has fallen out of favor for the last few years - even with Blackberry. The photo reveals what appears to be a smaller phone with a near-square screen, running what's probably Ice Cream Sandwich, with dual cameras and a removable battery. Beyond a small indented logo below the keyboard (notably smaller than AT&T's logo, in fact) there's no more information to be had.

Of course it's always possible that this could be a fake, but evleaks has been reliable in the past and there's very little motivation for fakers to aim low. If NEC is looking to move into a larger global presence in the smartphone market, more power to them... we just hope they bring some of their more interesting hardware along for the ride.