Didn't pick up AT&T's version of the Galaxy S4 when it hit shelves this weekend? You're a smart one (not to say that those who did pick one up aren't smart, of course), because Amazon Wireless has already knocked the price down to $168. Sure, that's a pretty random amount ($32 off AT&T's price) considering we're used to seeing prices drop in increments of $50, but hey – a deal is a deal, right? 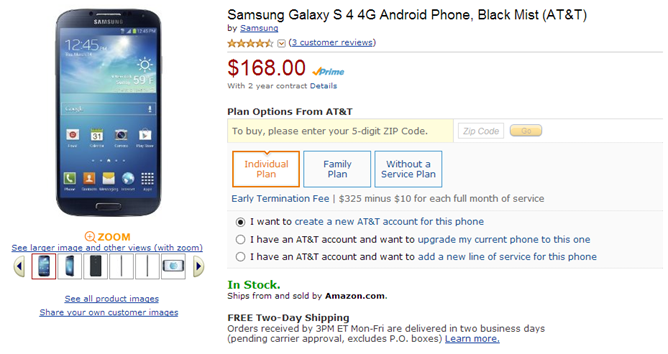 Naturally, you'll have to sign a two-year contractual agreement with AT&T to get the device for that price, but considering you were probably going to do that anyway, it doesn't really make sense to spend more money. Head below to snag this one.

Dextr Is A Gmail Client That Brings You Closer To The People You Love - And Cuts You Off From ...

Evernote Food For Android Goes v2.0 - Now Lets You Explore Recipes And Restaurants, Is Kind Of ...