Even in its current and somewhat dated form, AirDroid is easily one of the best apps on the Google Play Store. The sheer flexibility and polish of the remote access tool has made it one of the first things I install on any new device. The original AirDroid is still great, but for the last few months the development team at Sand Studio has been beta testing AirDroid version 2, with a ton of new features added to its original toolset. AirDroid 2 will be live on the Play Store in a few hours - here's an exclusive preview of the final build. 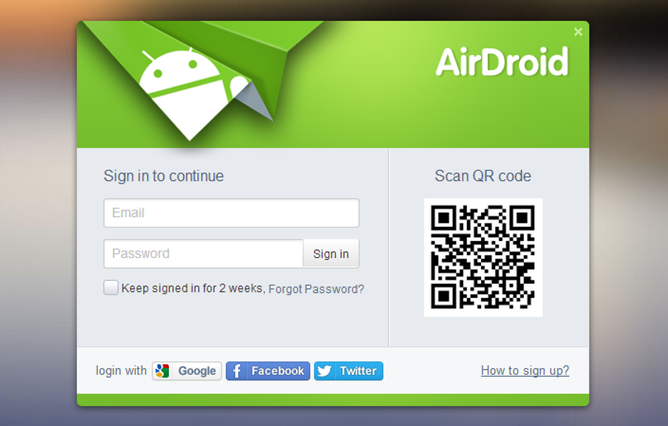 The setup for AirDroid 2 should be familiar for current users. Hop on the same WiFi network, start the app on your phone or tablet, and use your PC browser to log in at the given URL - beta testers have been using V2.airdroid.com, but it should go back to web.airdroid.com upon final release. You can also use a local IP address. Here's where things start to get different: instead of the existing code-based authentication scheme, you'll log in with a dedicated AirDroid account, which can be bound to your Google, Facebook, or Twitter login. No more looking back to your phone for a string of numbers, though you've still got the option for a quick camera unlock via a QR code. 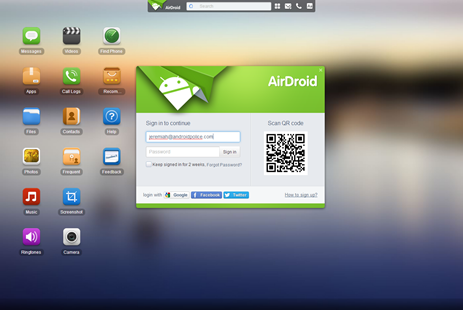 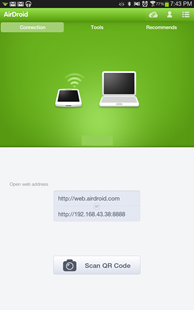 The most useful part of this is that it's no longer necessary for your phone and PC to be on the same network, or indeed, anywhere near each other. Once you've started AirDroid 2 and set up an account, you can access it from anywhere, as long as your device is connected to the Internet. Of course, this kind of remote access puts strain on AirDroid's servers, so when you're not on the same network you're limited to 1GB of data access. The 1GB limit has been in place during the beta stage, but users may be able to pay for more when the app goes gold.

The web desktop looks a lot like it always has, but that doesn't mean it's the same. The new Toolbox widget on the right side condenses some of the more useful tools: file upload, non-Market APK installs, clipboard sharing, and URL forwarding. The search bar on top has three new options: Call, Setting, and Sign Out. They're pretty self-explanatory. Settings opens up a new menu centered around your AirDroid account, including a list of your connected devices and data usage - more on that later.

There are a few more shortcuts on the main screen, most notably Camera and Phone Location. Beta testers will be familiar with both, but for those of you who haven't sampled AirDroid's latest and greatest, they're pretty cool. Camera gives you a live view from your phone or tablet's rear camera - and here's the crucial bit - without actually activating the camera app on your phone. It updates about once a second, and you can take manual photos. This feature should be handy for a little home surveillance; remember to keep it legal. 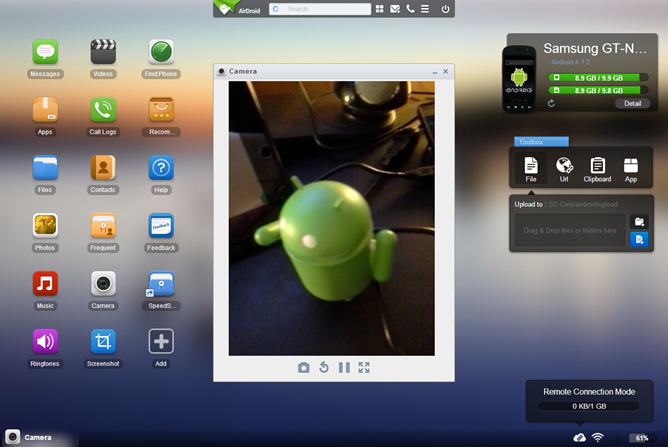 You can also add direct links to folders on your device's internal storage or SD card. Right click an open area and click "new folder" to make one. This should be useful for quickly adding or retrieving files to your favorite directories, or some easy root-enabled modding. The multiple desktop feature (accessible from the four-square icon in the search bar) isn't new, but the ability to move icons between desktops is. Right-click a shortcut to move it to any of the other three workspaces.

The remote login feature enables another useful tool: location. AirDroid can access your phone or tablet's GPS radio to get a pinpoint location. It takes a minute, but it's just as accurate as Google Maps, which AirDroid uses to display the location. Obviously this isn't all that necessary when you've got your device handy, but if you lose it, you'll be happy it's there. (Hey, Google: why haven't you done this yet?) For those who are concerned with privacy, the feature can be disabled in the Android app. 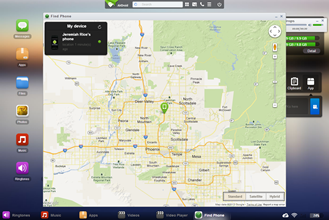 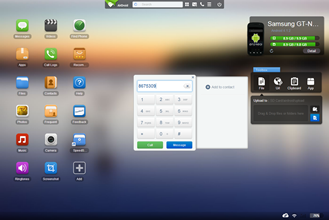 Users can also start calls right from AirDroid, a la Google Voice. Click the phone icon in the search bar to bring up a dialer, which will automatically call from the phone when engaged. It's useful for anyone who spends all day chained to a desk - copying and pasting numbers in is great. Calls can also be initiated from the Contacts list.

There isn't a whole lot that's new in the UI department. Everything in AirDroid has been given a nice layer of spit and polish, but the biggest change is to the Messages (SMS) mini-app. The function has been cleaned up and is considerably faster. A complete history of message logs con be accessed in the same way that you can access calls, with search and emoticons thrown in. 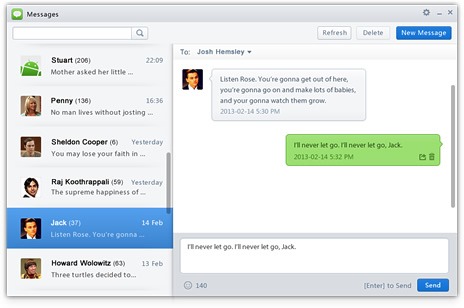 The Windows-style taskbar for open "programs" is the same as it ever was, and open windows can be minimized, maximized, and resized at will. On the right side of the taskbar you'll find a new cloud icon, which shows the used portion of your 1GB data allowance when clicked. The old battery and signal indicators are still in place. Icons have been tweaked, and a new link for feedback has been added. Users of the original app will be happy to hear that drag and drop is now supported on compatible browsers. You can also add quick contacts that show up as shortcuts. A "Recommends" link lets AirDroid bring in a little sponsored revenue.

As with the original app, AirDroid 2 is split into three tabs on your Android device. The default tab is Connection, which is pretty much the same save for a username and a data meter once you're logged in. Tools now includes a quick link to the Tethering menu, for those who want to access their device while using it as a WiFi hotspot or tethered access point. The Recommends tab is basically the same thing as the link in the web desktop. In the menu bar you'll find links to a Server State window, your user account, and a Settings menu. 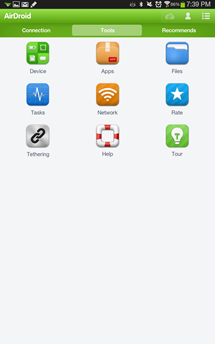 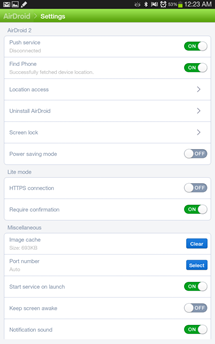 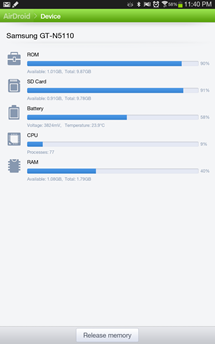 In Settings you'll find some interesting additions. You can enable or disable the remote login "push" feature and remote location settings, a power saving mode (which seems to speed up and slow down the refresh rate for remote login), and enable or disable a forced HTTPS connection. A good inclusion is the ability to select a notification icon, notification sound, both, or neither - very nice if you prefer to keep your Android notification area spic and span, and use AirDroid constantly. A few quick links to the Android settings menu are also present.

In its second incarnation, AirDroid remains the best app of its kind for remote access, thanks to a good selection of new features and consistent performance. The inclusion of a truly remote login system is executed well, and will be a handy tool for any advanced user. Most people should never go over the 1GB remote data limit (for now) in the free app, and those who do should have an option for increasing their allowance soon. An in-app purchase or subscription on the Play Store would be a good addition here. 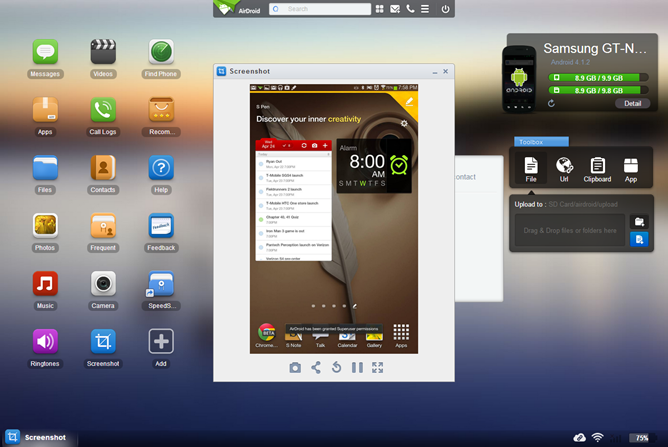 If there's one thing that I'd like to see in future versions of AirDroid, it's the ability to pay for the app. I've used AirDroid so much over the last year that I'd be happy to do so, and while I don't begrudge the developers their inclusion of some sponsored links and the search bar, it would be nice to be able to pay for an ad-free experience. Even so, AirDroid is an app that has earned its place on every power user's device, and I have no hesitation in recommending the latest release for everyday use.

Version 2 of AirDroid will be published on the Play Store this afternoon.