Here at Android Police, we love Google Now (and all the associated voice actions), but the natural language could use a bit of sprucing up. If you'd like to try an alternative voice assistant, Indigo may grab your attention on this front. The pitch here is that the app remembers your conversations and can sync those inquiries across devices. 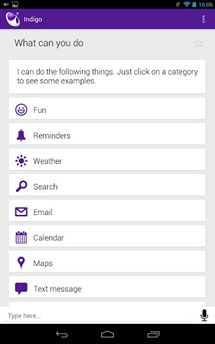 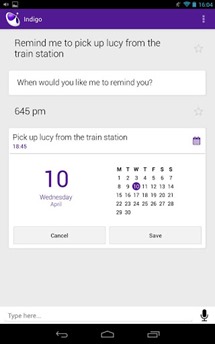 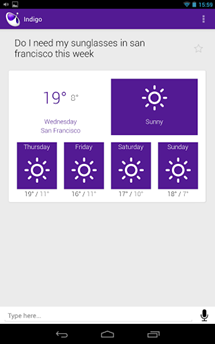 If you ask a question like, "Where can I find Indian food around here?" you'll get a list of results. Tap on the one you're most interested in. You can then follow that up with "How can I get there?" From the context of your last question, the app can understand that "there" is "the indian restaurant." It even works if you switch devices, provided they're both logged in to the same account.

The app also has a bit of conversational flair to it, much like Siri (and which Google intentionally avoids). Ask it playful questions and you get playful answers. Though in my tests, this caused a bit of trouble when I tried to ask "When does Iron Man 3 come out?" Indigo replied "Can we talk about something else?" Huh. Weird. After a few tests I discovered that Indigo seemed to be interpreting "come out" not as "be released in theaters" but as "come out of the closet." Being unwilling to speculate on the sexual orientation of a movie, Indigo politely declined. Hey, you know, that's cool. Gossip is rude and I wouldn't want to offend the film.

Indigo is free on the Play Store and currently touts itself as a beta app.