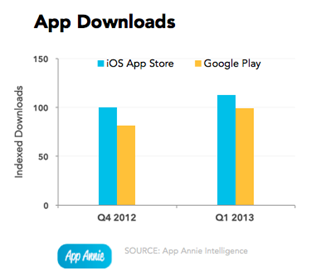 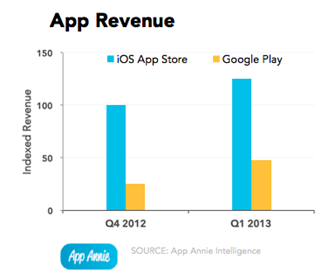 It's not all bad news. That gap is a lot smaller than it was the previous quarter, when iOS developers brought in 4x the revenue of Android devs. Part of that may be due to Apple's above average holiday quarter, though. Regardless of the reason for the scale, it's still a problem for Android devs.

So, why is this happening? Well, according to the report, games are a significant driver for revenue, accounting for 70% of iOS and 80% of Play Store cash. Though, with the App Store pulling in 240% of the money Google's devs are, leading Apple by 10% on this metric still leaves the devs with less than half the money available on iOS.

Of course, the alternatives to these two platforms—like Blackberry or Windows Phone—still lag far behind either in terms of sheer number of apps available or revenue generated. However, developers can take a couple things away: a.) there is virtually no distinction between the absolute sizes of the iOS App Store and the Play Store anymore and 2.) the business models for making money on Android are nowhere near optimized.

Either that or the old stereotype that Android users are inherently cheap is true. But we'd hope that at least some folks out there can prove that adage wrong.