This update is causing major issues for some people (myself included), and on multiple devices. If this happens to you, uninstall the game and then re-install. As long as your profile in the game is signed into Facebook, your progress should still be saved. If you never did the Facebook sign-in, you're out of luck for the time being, unless you don't mind having your profile erased.

The new vehicles are both Chevrolets - the Cobalt SS and the Camaro ZL1. I'm not exactly sure what Hunter mode is, but it likely comprises a chunk of the 100 new events FireMonkey is promising in the update, not that Real Racing 3 was lacking in that department to start with. 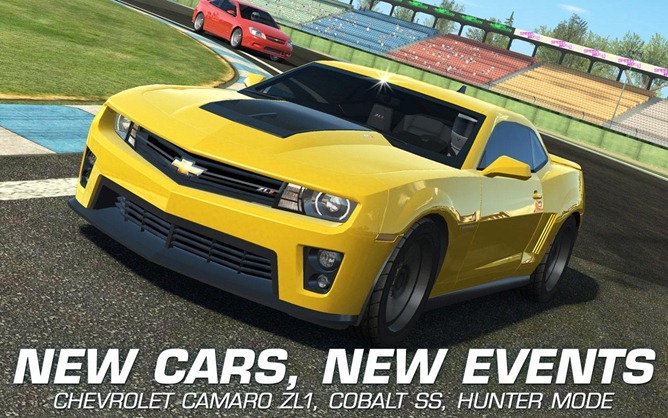 What's really cool about this update, though, is the cross-platform cloud save feature. If you're signed in with Facebook (ugh, I know), your Real Racing 3 progress will sync across all your devices, no matter which platform you're using. That's pretty awesome, actually. So if you have an iPad and an Android phone or tablet, your progress will save across both.

The update also includes an improved tutorial, an update main menu UI, and a stats leaderboard. Head to the Play Store to get the update, which will finish installing the next time you launch the game.