In Dynamite Jack, you play the part of a space marine that has been captured by the enemy and forced to work in the Anathema Mines. You don't have time for that nonsense, so escape it is. It seems like your alien captors are not the brightest stars in the cosmos – they leave explosives, flashlights. and keycards laying around everywhere.  Lucky for you.

You start at the lowest level of the mines, and your goal in each stage is to find the exit denoted by a shimmering point of light. You wander around the top-down maze of tunnels and facilities in search of the necessary tools to take you to the goal. Jack usually starts with no flashlight or bombs, so the first order of business is often to arm yourself. You might be forced to maneuver around much of the level without any weapons. I like this approach because it introduces some variety to the gameplay. 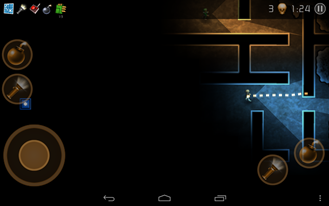 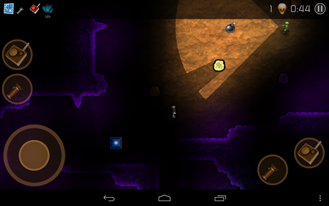 Most of the mines are shadowy or completely dark. You can lurk with impunity there, but should you pop your soft human head out in the light where a guard can see, it's over. Really, instant death. The guards often carry flashlights that can spot you, but there are also wall-mounted lights throwing off spheres of oddly colored light to watch out for. Saving is handled by small blue kiosks around the stage. Just walk into one, and your progress is saved. These spots are also refuges from the guards.

There are two control schemes in Dynamite Jack, and one is clearly better despite being less innovative. With the first option you can drag a line and Jack will follow it around the level. It sounds nice, but it's a little imprecise and means your stupid meaty hand is in the way of important things... like the game. The alternative (and more usable) option is to just manipulate the virtual thumbstick off to the left. This provides accurate movement and doesn't cause frustration.

Off to the right side are buttons for your flashlight and bombs. The flashlight is necessary for navigating around, but make sure you don't light up a guard. That's a great way to be spotted. The bombs are really fun to detonate in Dynamite Jack. They are used to bore new paths in the rock walls, and to take out the bad guys. It's very satisfying to sneak up and place a bomb, then watch some hapless alien walk right up to it. Tap the button, and it's lights out. A nice twist is that all the explosions attract the attention of other nearby guards – you've got to plan ahead. You can also draw them away from an area by setting off bombs in strategic locations.

The visuals are not the highlight of Dynamite Jack. What you're paying for is slick, compelling gameplay. With that said, Dynamite Jack is a nice looking game overall. It is simple – no super-high resolution textures or fluid effects. What you get with Dynamite Jack in the graphical department is a pattern of technicolor lights and darks. If you've got an AMOLED device, the vibrant colors of the lights against the pitch-black corridors will look killer. 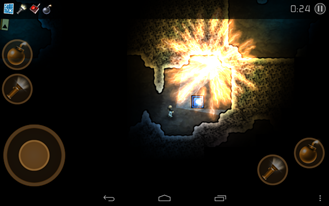 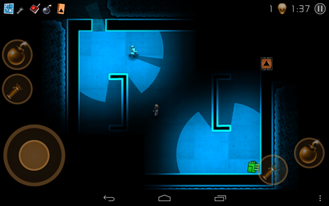 It should come as no surprise, but Dynamite Jack is rock solid and stable. I've had no crashes and no slowdowns. This is not the sort of game that really pushes a device, but that hasn't stopped other titles from ending up buggy messes.

Dynamite Jack comes with only 28 official levels, but that's only the beginning. There are a few hundred user-created levels, and most of them are actually quite good. You can also design your own levels, though the interface isn't the best. It's still more than most games offer, right? Dynamite Jack also keeps track of how fast you complete stages and places you on a global leader board if you're especially good. It's nice to have something to work towards in life. 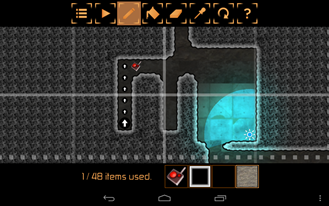 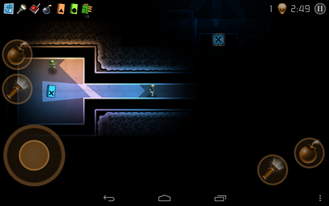 This title seems almost too simple at first. The graphics are stripped down, the first few levels are easy, and the mechanics are straightforward. It's the strategy and fluidity of the gameplay that make Dynamite Jack so engaging. The developer is asking $2.99 for this game, and it's a price I'm happy to pay. 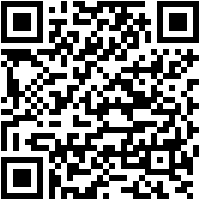