"Burner" cellphones, pre-paid phones that are used and discarded, have become a handy way to protect your identity if you find yourself dealing with people you might not otherwise want to meet. Just lately it has become possible to get "disposable" phones without the phone, thanks to apps like Hushed, which provides a limited-use virtual number that can be easily substituted for your real one. Burner is a new competitor in the same vein, happily landing on Android after considerable success on iOS. 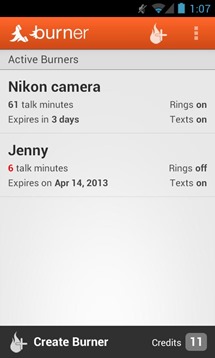 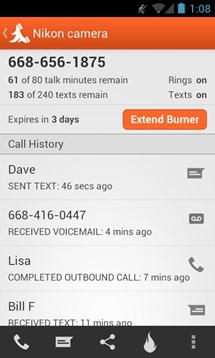 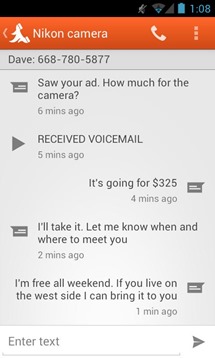 While the operation is similar, Burner is much more interested in the "use and lose" nature of its virtual phone numbers. (It's kind of like a phone version of 10 Minute Mail.) The app comes with one free number, which is good for one day, five minutes of voice use, or 15 text messages (whichever comes first) before it disappears. After that, you can extend its use or buy new numbers via in-app purchases: two bucks for a 7-day/20 minute/60 text number, with better deals the more you buy. Compared to Hushed, the time limits and text message pools are shorter at the same price points.

Keep in mind, Burner is not a VOIP service - you'll still need an active cellular connection and service from a provider. That said, it should be very useful for those who want to keep their real number in as few address books as possible. Burner is a free download for Android 2.3 and up.

Note: the activation servers seem to be swamped at the moment, probably due to an influx of eager Android users. I was able to try out the free credit after about 30 minutes.

LOS ANGELES--(BUSINESS WIRE)--Burner, the mobile privacy app by Ad Hoc Labs, is now available on Android in the Google Play Store and is now free for download on both Android and iOS. The Burner app puts users in control of their mobile identity and is the first step toward solving the growing problem of mobile privacy.

Burner has also made significant upgrades to its iOS app. New features include: customizable voicemail greetings; the ability to manage call history by starring, renaming or hiding conversations; improved notifications of in-bound calls, missed calls and voicemails; and other enhancements. In addition, consumers can now refer Burner to friends to earn credits for their account.

“We’re really excited to launch Burner for Android. Android is a huge market opportunity for us, and along with making Burner for iOS free, is a key step in making Burner available to everyone,” said Greg Cohn, CEO Ad Hoc Labs. “As privacy is becoming an increasingly hot issue in the mobile space, Burner is an important tool for users to protect themselves by adding an extra layer of anonymity to their phones.”

Burner enables users to obtain disposable numbers for voice and SMS communication. A user can have as many numbers as he or she wants, use each as a private line on iPhone or Android, and “burn” the number whenever he or she is done. Named one of Time Magazine’s Top 10 Apps of 2012, Burner is beneficial as a privacy layer in many situations, from posting contact information on social media, facilitating transactions on classified sites, online dating, professional use by teachers, doctors and lawyers, and more.

“Burner provides that extra layer of security people wish they had when meeting and dealing with strangers on the Internet,” said Burner user Josh R., a 30-year-old chef from Houston, TX, who has found the app especially useful for posting on Craigslist. “It’s so nice and convenient to sever the connection from annoying people who hold on to and misuse your number even after a posting is long gone.”

Jeffrey Z., a teacher from Danbury, CT, uses Burner to create a buffer between himself and his students when he offers his contact information, saying, “I would not want students to have my personal phone number for any reason—I think we all know how teenagers can be.”

Once a user downloads the free iOS or Android app, he or she can create a "Sample Burner" for free. Additional numbers can be purchased via credit packages starting at $1.99. There are also extension options available for purchase. 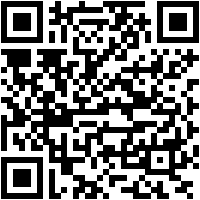 Dan Rosenberg: 'I See This As The End Of An Era For Motorola Rooting And Modding'