From poorly-executed "leaks" to potential legitimate sightings, there's been a lot of hubbub about Google's supposed unified messaging service, likely called Babel. This isn't necessarily surprising. After all, if you asked most Android enthusiasts what feature they most wanted from the platform in its next iteration, you'd hear a lot about unified messaging. We've tried to stay clear of covering every flurry of Babel-related murmurings so far, but today we saw something new – Google+ user Patric Dhawaan posted a screenshot of what he says is a notification in Gmail, triggered when "pruning" his inbox.

Essentially, the notification is a line of text explaining that the group of messages the user has just deleted included some from Babel chats, and those will still be available "in other Babel chat applications." But a line of text is pretty much the easiest thing in the world to fake, right? That's true, but (typically, anyway) editing a screen snippet like this in, say, Photoshop, would change the file very subtly.

The screenshot, as we can learn from tools like FotoForensics, was taken from an Apple computer. Screenshots taken from Apple computers are, by default, named Screen Shot YYYY-MM-DD at TT.TT.TTam.png, and contain a few lines of XML data that look something like this:

The original file (which you can find here) fits both specifications. What's important, though, is that editing a screenshot like this and then saving it again will eliminate the above data from the file. The notification could be faked using some simple code, but there are other clues that point to its legitimacy. A few commenters on Patric's post confirm the popup message, one going so far as to say he can reliably reproduce it (and will post more later).

Finally, we can be pretty sure that not only is Babel the name of the service, but that it will be present in Gmail in the future. Just have a look at this quick search of the Chromium bug group.

In the end, if this screenshot is a fake, someone went to a lot of unnecessary trouble to make it, and ended up pretty close to the mark anyway. Check out the original post and follow the discussion below.

Update: Since our original post, more Babel evidence has trickled in. In a post to Google+, Roga Moore pointed out a hint at video chat, found in a Google code issue here specifically, the linked issue contains a crash log with the following line. 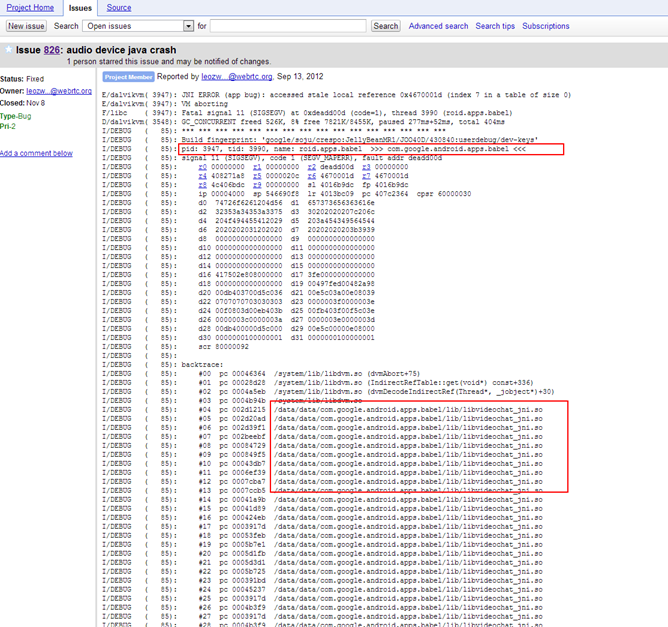