Password and autofill sync - features that have been in testing in Chrome beta for Android since last month - have finally come to the stable release channel of Chrome for Android. The password sync option isn't appearing for me yet, though the Chrome Blog post on the update suggests it may take a few days for the new features to roll out to everyone. 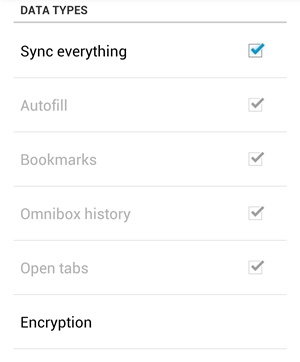 The official Chrome Releases blog details the changes (well, as detailed as they usually are), below:

The update also brings Chrome for Android up to Chrome release 26, basically bringing it to parity with the desktop version. To  adjust the sync behavior, go into the settings menu and tap on your account name, then the 'Sync' label. Both of these are a big plus, and while Chrome may not be the quickest Android browser on the block, its robust feature set is hard to argue with.