Earlier this morning, we added SwiftKey Tilt to our 2013 April Fool's day post. At first blush, it just looks like another funny idea made specifically for April Fool's Day – little did we know that Tilt is actually a real feature. According to a comment left on the official SwiftKey Blog, you can enable Tilt by long-pressing on the word "tilt" in the suggested words area above the keyboard in the newest version of the app.

Sure enough, it works. 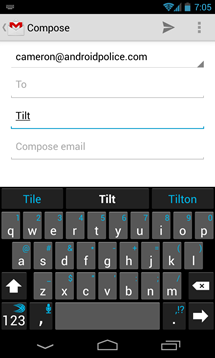 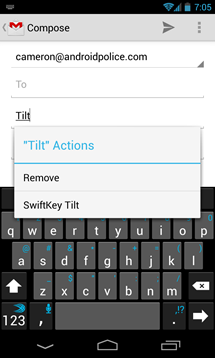 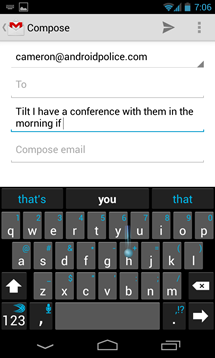 And it functions just like in the video, too – simply move your phone around and the little ball (shown atop the "H" in the third screenshot) works like your finger to Flow Through Space. Obviously this isn't a practical way to type (it's actually pretty difficult – I bounced the ball into suggested words to get a somewhat cohesive sentence for this story), but it's still pretty dang fun to play with.

If you're a SwiftKey user, definitely check it out.