Update: The update is now live in the Store – find it by hitting the widget at the end of the post.

Last month, Google announced they'd be killing off Google Reader this July. Yes, in just a couple of short months, one of the most beloved RSS resources in existence would be kaput. Google says it decided to pull the plug because of dwindling use numbers. While there were plenty of discussions about Google's real motivation (everything from well-reasoned examinations of the situation to cries of "EVIL!"), there was something more important happening behind the outcry – there were people stepping up to fill the gap in as seamless and timely a fashion as possible.

One group looking to fill the Reader-shaped hole in former users' hearts is Feedly. Feedly, as an app, has been around for a while (we first covered it over two years ago). Popular as it may be, Feedly was just one of many RSS reading solutions until their blog post on March 14 announcing they'd be creating a Feedly clone of the Google Reader API. Since that post, we are told, the service has gained three million new users. Yes, 3,000,000 users have joined since the announcement of Reader's death. They codenamed their project Normandy. Feedly promised that, if users began using the service before Reader got shut down, their transition would be totally seamless, and today they are ready to bring a brand new experience to Android users with version 14.

I've had a little bit of time to play with Feedly 14 (which will be hitting the Play Store today), and thought it may be useful to give readers who may have not tried it out a full hands-on review of the service. Let's dive in. 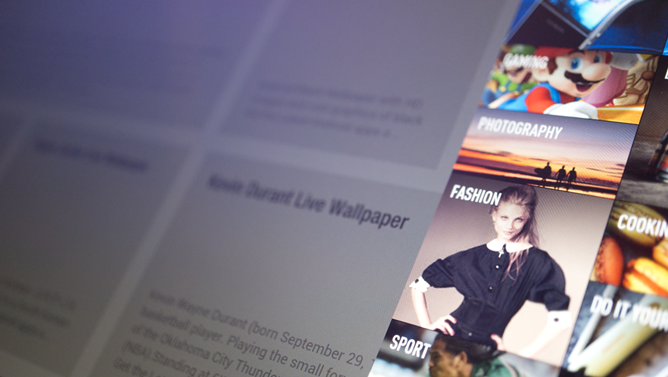 In a nutshell, Feedly is a reader. Its functionality is simple in concept, and well-executed. On first run, users can import their entire Google Reader collection by simply choosing a Google account. Of course, that will change when Reader dies this summer, but users who switch before Reader switches off will have no problem. As a side note, Feedly also encourages developers using the Reader API to get in touch, as they'd "love to keep the Google Reader ecosystem alive." That said, let's get back to the app. 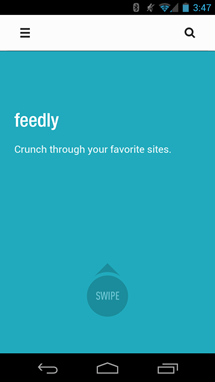 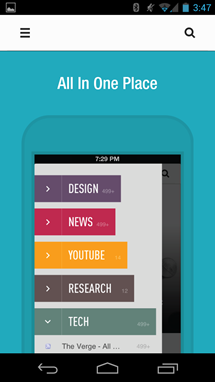 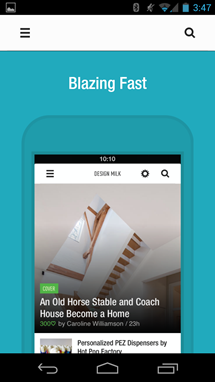 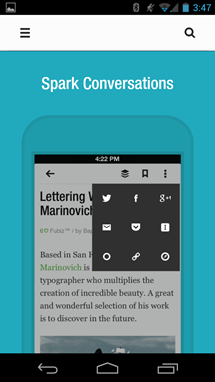 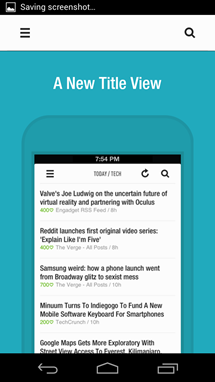 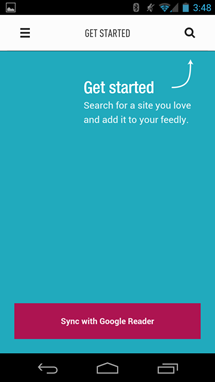 Feedly 14 is well-made. Its design looks a lot like the app's previous iterations with a few visual tweaks, but it functions nicely, and makes heavy use of very simple swiping gestures to navigate through lists. By the way, there are three list views: List, Magazine, and Cards view. These are essentially what they sound like. List view is the typical dense, line-item configuration. Magazine view is like list and still has a cover image, but has thicker line entries, each with thumbnails from the relevant piece of news. Cards view is just what it sounds like – full-screen cards, one per story, navigated by the same upward swipe motion. 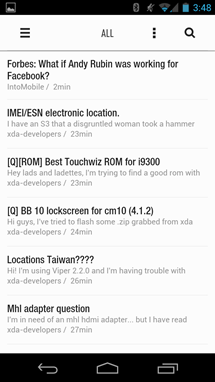 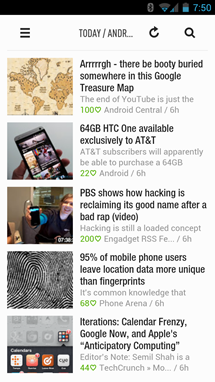 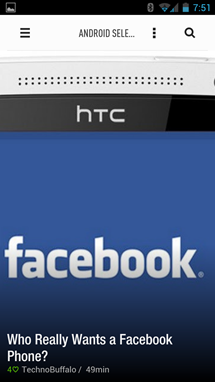 Feedly's interface is somewhat of a strange case. Really, it's very similar to Feedly 13.x, but has a few tweaks and improvements. It generally follows Android guidelines, but the slide-in menu is populated with brightly colored tags for each reading list (plus settings and bookmarks) with animated switches to expand/collapse lists. This isn't a detriment, just an interesting UI element.

The interface, as mentioned earlier, features a lot of swiping. The upward navigation swipe doesn't make a ton of sense for list view (you'll swipe through cards comprised of a handful of headlines), but it works nicely with cards. Another quirk is that there's both a Settings menu and an overflow menu, each with different controls. Again, not a huge nuisance, but worth mentioning.

What is a nuisance, though, is that there's no easy way to change views when reading the "today" list – the overflow menu only appears in subscription lists. 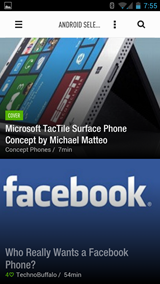 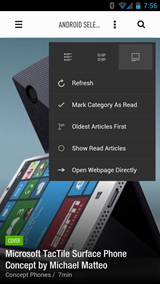 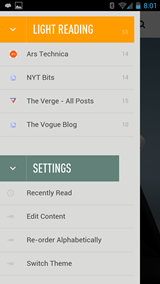 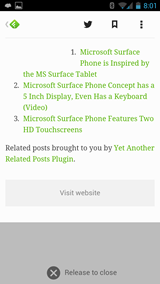 Actually navigating stories – besides a counter-intuitive swiping list view – is quite easy, and stories can be closed quickly by swiping up and releasing. Want to mark an item read? Just swipe to the left over its title.

Also worth mentioning is the fact that Feedly has a handy new sharing panel for spreading links to Facebook, Google+, Twitter, Pocket, and Instapaper, and the ability to quickly and easily share articles via email.

A new functionality that Feedly boasts is enhanced discovery. The app has a super fast search function in which users can find topics, URLs or titles. The feature also suggests topics and can automatically call up predictions based on what you're typing. 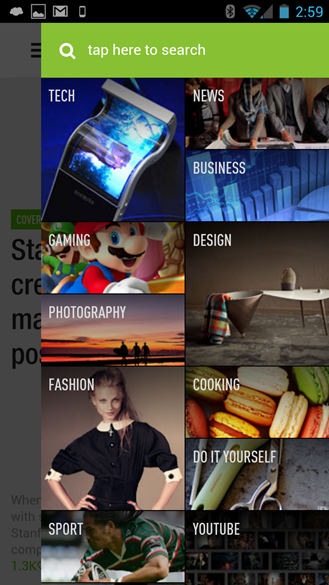 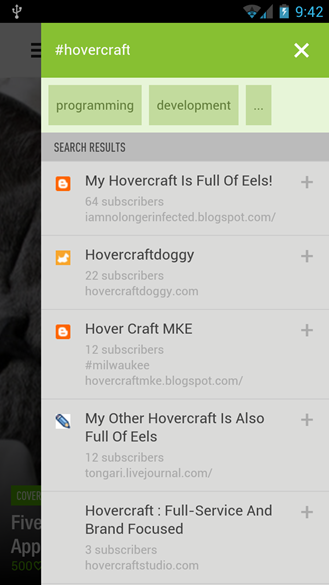 Did I mention Feedly is tablet compatible? As most users would expect from any well-made app, Feedly will adapt to the big(ger) screen just fine.

Interestingly, choosing to read more of a long article (past the snippet provided by Feedly on initial click) will open up a full view of the webpage, with the option to "remove clutter," which returns the story to Feedly's clean, centered environment with just text and relevant images. 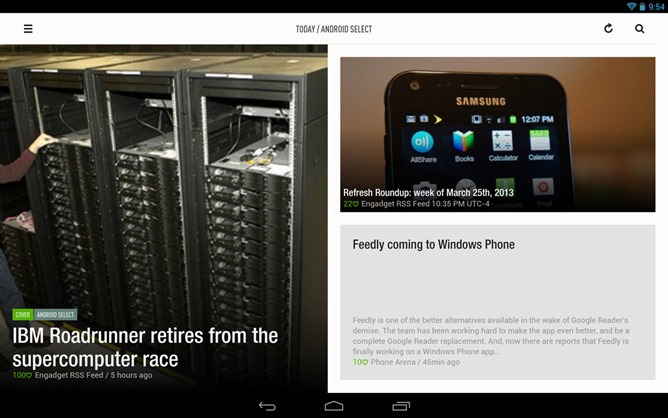 In the end, much of the app's user experience is reliant on what you put in, and the headlining feature of Feedly 14 is Normandy – Feedly's effort to clone their own version of the Reader API. The number and density of your lists will determine how much information you find here, while the interface just provides a nice structure in which to "crunch through" your sources.

The question that's probably on most readers' mind is "will this work as a solution for former Reader power users?" The answer is yes and no. Will the app alone take care of your entire Reader workflow? Probably not. The interface, while great for normal users, may get in the way of people who want to buzz through thousands of stories in short order.

That said, the Feedly app isn't necessarily intended to work alone. On its website, Feedly gives a great set of beginning tips in migrating your Reader workflow to its service including tagging, starring, preferences, and keyboard shortcuts that will make your PC experience just about as rich as you could hope for. Feedly's web interface, by the way, is really nice. I would recommend any Reader devotee desperately searching for refuge to check it out.

To pare this entire review down into a few words, Feedly 14 is great. It's a well-built app that does what it sets out to do, and promises to keep doing it even after Reader is finally dead and buried this summer. Whether you're already a Feedly fan or a refugee from Google Reader looking for a great app to take up the mantle, you should try Feedly 14.