When Jawbone's UP wristband was released in late 2011, I was excited. Then I was disappointed. The motion-tracking band seemed like a perfect step into wearable tech at the time, but its companion app wasn't available for Android. Whether and why Jawbone didn't see fit to invest resources in developing for Android was a mystery, but now – thankfully – it's immaterial. Just over a week ago, Jawbone released an official UP app to the Google Play Store, and I wanted to be first in line to try it out with Jawbone's updated 2012 wristband. Having used the band (which, by the way, is available from Jawbone for around $130) and app for about a week now, I've learned several things that will hopefully help those on the fence in making a decision about the device. 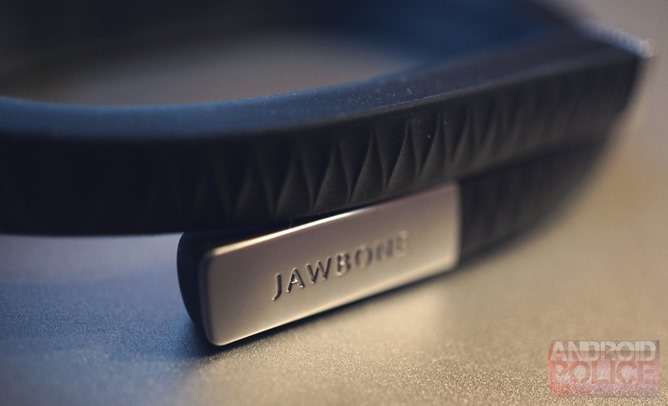 The UP wristband itself seems odd at first. It's an oval shape that tapers at both ends (the middle is where the hardware action is). One end has a button and a couple of embedded LEDs, while the other has a 3.5mm plug with a stylish Jawbone-branded cap. The whole band is covered in a very Jawbone texture, and – while flexible – it holds its shape around the wrist pretty comfortably. 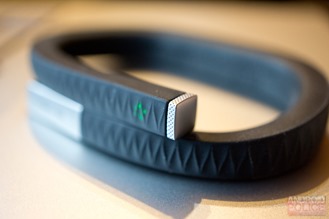 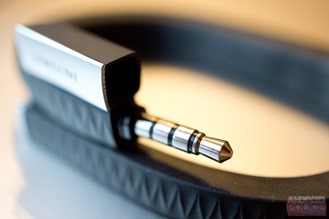 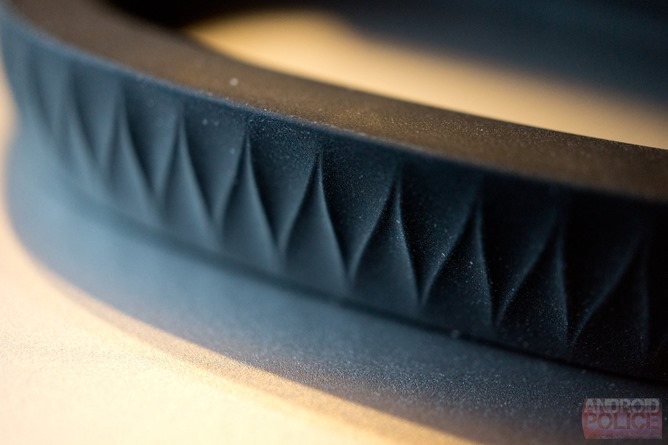 Inside the band is a vibration motor and motion sensor, along with two LEDs with cutouts shaped like a sunburst(?) and a moon, for toggling between day mode and night mode with a simple press-and-hold action on the band's singular button.

The band is made for 24/7 wear, and is definitely comfortable enough to accomplish that. What's more, it's not too conspicuous. During my week of testing, I only had two people ask me what it was, and that was only because it vibrated. Speaking of vibration, the band can do a lot more than its simplistic design would suggest. The UP, besides tracking your activity around the clock, can give you "idle alerts" when you've been sitting around too long (this time is determined by the user), it can wake you up by vibrating at the right time (within a specified range on either side of your target alarm time), and can even give you the optimal power nap by buzzing at just the right time (about 26 minutes according to Jawbone) after it detects you falling asleep. The app can do a few more things, but we'll discuss that a little later.

Most of the band's functionality is powered by MotionX technology, and the band is surprisingly adept in detecting your sleep/wake cycles (even detecting when you wake up during the night), as well as your overall activity levels, compared to ideal goals.

So, does the wristband work as advertised? Since the band is simply recording data, most of its functionality is reliant on the app, the notable exception being the band's wake-up features. I found that the band's vibration was generally strong enough to wake me up, though it was ironically a slightly jarring experience coming out of a full night's slumber. Idle reminders on the other hand were great for reminding me when I needed to step away and get in some activity.

As far as charging goes, UP held to its "80 minute" charge time estimate (via included USB connector), but only lasted about eight days on battery instead of ten. Charging the device about once a week, however, is hardly taxing.

For a band that is built to be worn constantly, I was shocked by the wear and tear it picked up in just a week's time. At the end of the week, the band already showed scuffing on the side of one of its tapered ends, and the Jawbone-branded 3.5mm cap was worn. The damage wasn't detrimental to the band's functionality, but I will be interested to see how it fares as time goes on. 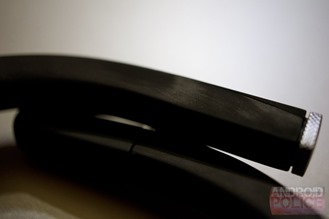 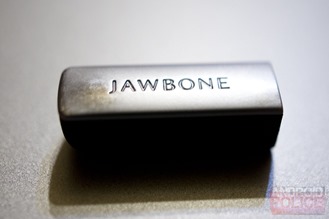 While the UP's hardware is the basis for its functionality, the band would be pointless without an app to both gather and interpret data. Jawbone's UP app can actually communicate two ways with the band, gathering data and sending information regarding alarms, daily activity/sleep goals, etc.

The app – right now – is limited to a short list of Android devices including popular handsets like the Galaxy S III, Note II, Nexus 4, RAZR MAXX HD, and several others found here. That said, the app's Play Store listing showed my EVO LTE as compatible so I gave it a shot. The short version of the story is that the app was basically unusable on the EVO LTE. On the Galaxy S III however, it worked more consistently. While I can't confirm this, I suspect that the dysfunction is a matter of hardware variation (that's Jawbone's official stance), but for some reason when I loaded the app on a Nexus 10 out of curiosity, the band actually synced to the device about one out of five times. All of that having been said, let's move on to the app's actual functionality.

Basically, the UP app syncs with your band for motion/sleep data and alarm preferences. Any functionality beyond that (like food or mood tracking) needs to be manually entered. Once you've connected your band and signed in to the app, you'll be greeted with an empty stats screen. Once you start using the band though, your sleep and activity graphs will start filling up. Usually, you'll just see sleep and activity as percentages of your goals. Below that is a handy stack of tips and a timeline of your recent activity. Tapping on either graph bar will bring up a handy summary of your activity or sleep with some really interesting breakdowns. 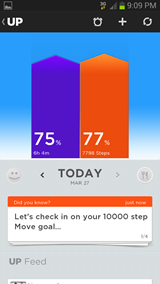 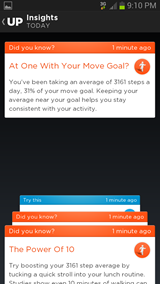 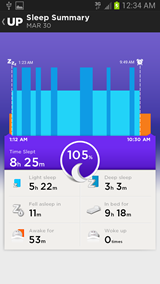 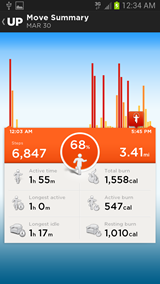 From the main screen, you can also log food and moods, which will come in handy for UP's various trend graphs and "Lifeline," all accessible through a sliding menu. Logging food at a high level is actually very easy – the app has access to a pre-built library of common foods, which makes adding meals fairly quick. Logging a workout is also easy – just choose the activity type, slide up or down to choose an intensity level from easy to "gut-buster" and enter a duration. The mood interface is a simple slider from arms-in-the-air happy to about-to-pass-out tired. Food and workout activity will show up right alongside your sleep and motion info on the front page. 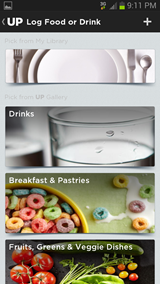 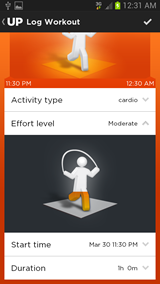 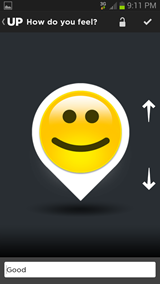 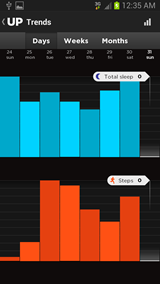 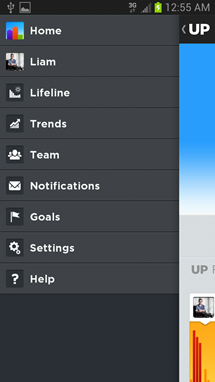 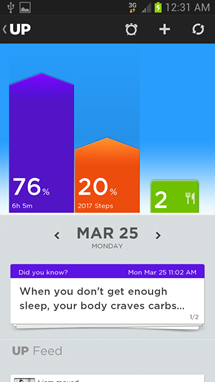 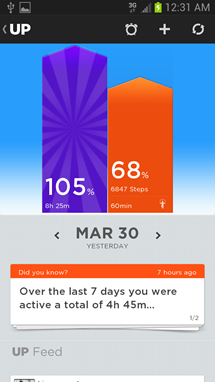 Also in the slide-in menu are options for calibrating the band by using its built-in stopwatch mode. This essentially serves to make the app's data interpretation more accurate. Users can also communicate with "teams," finding and checking in on friends' progress by searching either Facebook or contacts for those who have "stepped UP." Unfortunately, no one in either category had stepped UP in my case.

To put it simply, the app does a lot. A whole lot. But it won't do a lot automatically. In my mind, the functionality offered by the app is great for those who want to maintain their data. In an ideal world, though, wearable technology would automate more of this. Food selections would automatically load average nutritional information, the band would do its own "calibration" by learning from you, and the tips the app offers would be better suited to your specific needs, rather than general tips.

So, how were things going after a week? I can say with some certainty that my experience changed throughout my seven-day initial trial. I began the week eagerly exploring the UP app, trying out different information input options, setting alarms, etc. but ended the week only passively caring about the information I was getting. Perhaps this is because the full functionality of the band isn't completely relevant to my everyday interests, or because I don't have the patience to enter too much information by hand.

It's this writer's opinion that the UP is more or less a baby step toward truly powerful wearable tech. The wristband offers a lot of functionality, and actually looks pretty good, but even those who only want wearable tech to get in touch with their "quantified self" may get bored with the device, and tire of manually entering food, nutrition, and workout data. What it does it does well (if you're on a supported handset), and if you have a very active lifestyle and a fascination with quantifying your life, you may actually love it. But I was too distracted by the idea that something better would evolve from this concept to find a lot to convince me the band was worth $130. 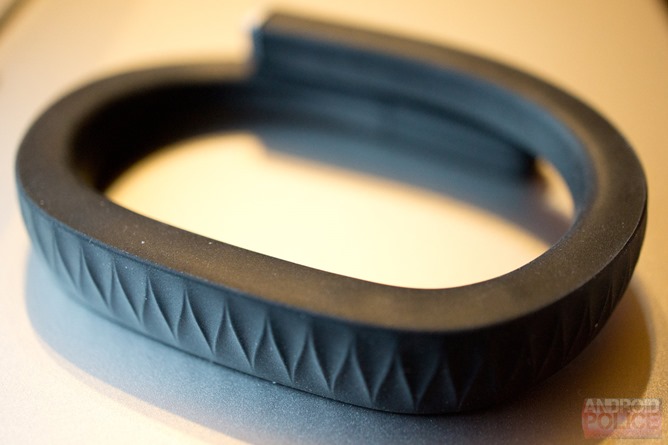 It Has Begun: April Fool's 2013 Roundup From Around The Web [Continuously Updated]