Google has announced a new initiative today that might, if we're lucky, slowly lead to some meaningful changes in how patent litigation is approached. Or, alternatively, make it easier to highlight the jerks who are ruining it for everyone. The Open Patent Non-Assertion (OPN) Pledge gives would-be inventors a pool of patents that Google promises to never sue anyone over, "unless first attacked." That last part is where eyebrows go up, though.

First, some context: there are 10 patents in the mix, which already isn't a lot. The company says more will be added over time. For these ten patents, Google is ensuring that any company, group, or developer working on open source software may use the technology without worry of being sued by the search giant. Unless that company attempts to attack first.

Of course that "attacks first" clause is where things get interesting. According to the official write-up here, Google reserves the right to terminate the promise if a company that utilizes any of the pledged patents (again, for free or open source software) sues Google over any of its products or services.

Because our Pledge is a promise not to assert certain Google patents without requiring any payment from a Pledge Recipient, we think it is only fair that we condition the Pledge upon the Pledge Recipient (and its affiliates) not asserting or profiting from the assertion of patents against Google, its affiliates, or its products or services. Accordingly, Google reserves the right to terminate the Pledge, to the extent Google deems necessary to protect itself, its affiliates, or its products and services (“Defensive Termination”) with respect to any Pledge Recipient (or affiliate) who files a lawsuit or other legal proceeding for patent infringement or who has a direct financial interest in such lawsuit or other legal proceeding (an “Asserting Party”) against Google or any entity controlled by Google or against any third party based in whole or in part on any product or service developed by or on behalf of Google or any entity controlled by Google.

In other words, Google wants immunity from being sued for any patent if a company or developer uses some of the IP that it has offered. Now, it's a little difficult to say for sure how this would play out in reality, but the way this document is worded, Google could, hypothetically, allow a for-profit company to use its patents for open source use, but rescind that offer if it sues Google over a patent on unrelated closed-source software.

That's just part of the problem, though. As FOSS Patents points out, the 10 patents that Google has offered is downright paltry. In 2005, IBM and Sun Microsystems, for example, collectively offered a couple thousand patents under a similar deal. In fact, in 2011, Google gave 9 patents to HTC just to sue Apple. While the search company has said more will be coming, it needs to be a lot more if it's going to have any substantial impact on the patent field.

Still, it's a little unclear as to whether this whole deal is strictly a good thing. On the one hand, it can certainly help a small development team or company to have a pool of patents that it knows it can use without fear of retaliation. Also, keep in mind that patents are not like copyrights. The nature of patents is that inventors have to show how they did it, so these companies don't just have the rights to the IP, they have the instruction manual, too.

On the other hand, they know that if they use those patents, and later discover that Google has copied something else they've done, they can't sue or risk Google returning fire over a (potentially) critical part of their business. 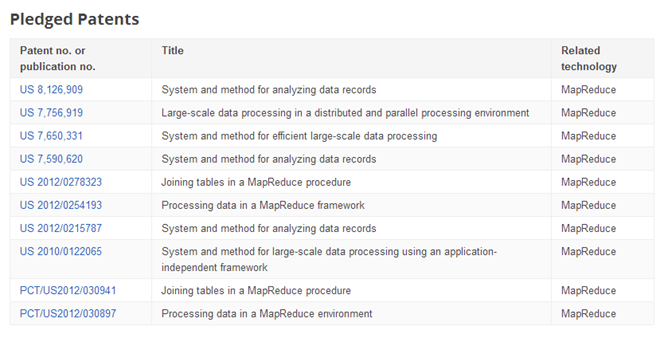 Now, that being said, it's very much unclear if the situation would ever play out this way. After all, the key beneficiaries of this type of open patent pledge are going to be smaller companies and independent devs. A company like Samsung, for example, doesn't need to rely on free IP to get by. It can either license patents, or even shell out a billion (ish) bucks in lawsuits if it uses something it didn't have permission to. And patent trolls really won't care if they're using protected IP or not so long as they can win the legal battle and walk away with some damages.

While in principle it sounds iffy, in practice it's likely just a hedge so Google can still countersue, say, Microsoft if it ends up in a legal scuffle. In that situation, Google wouldn't want to give up the rights to some free patents that it gave to everyone, just because it tried to be nice to the FOSS community. Still, it does seem like somewhat shaky precedent.

All of the analysis of possibilities is moot, though, because as stated before, there are almost no patents here to really work with. Even Google stated that the 10 patents offered up so far already have open-source versions in active use. So, it's unclear what might be gained from this.

The idea is nice, but if Google wants this to be anything more than a lazy attempt to garner some feel-good press, it needs to put up a lot more patents.