Facebook is throwing an Android event at its headquarters in Menlo Park in exactly a week - on April 4th at 10am Pacific to be precise. We've just gotten our invite, and from the looks of it, so has the majority of the Android and tech press. Needless to say, Facebook wants as many eyes as possible on whatever it's about to announce, be it a new Facebook-heavy phone, another app, or maybe even a full-fledged Android-based Facebook OS not tied to specific hardware.

Judging by the "Come see our new home on Android" motto, I highly doubt it's going to be a single app or an app update. Rumors of a Facebook phone have been flying around for years, but we're not going to get ahead of ourselves either, especially since Mark Zuckerberg vehemently denied every one of them in the past. TechCrunch thinks it's going to be a modded Android OS running on HTC hardware. 9to5Google corroborates the HTC rumor with "people familiar with the development of the marketing campaign," which evidently will focus around the user, rather than the phone. Further, 9to5 says the HTC Facebook phone will be "reminiscent" of an iPhone, with a central home button flanked by two "function" buttons.  It's possible. Let's just see what happens come next Thursday, shall we? 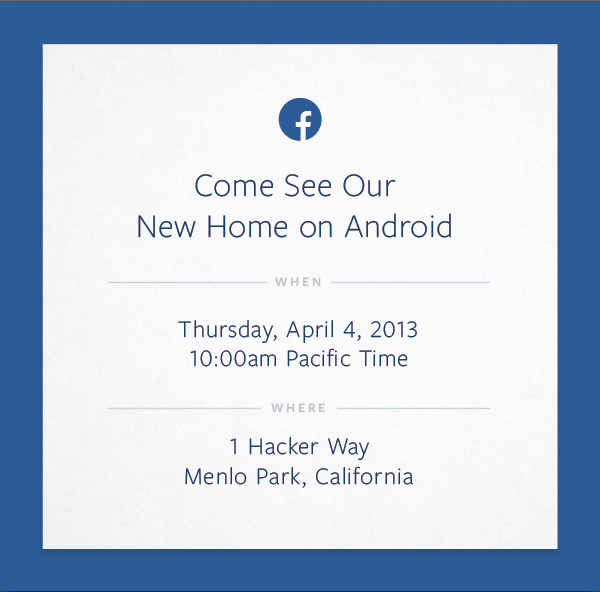