Yesterday, we finally decided to get to the bottom of Google Keep's new font, Roboto Slab. Shortly before that, however, we had an internal discussion about Keep's strange UI/UX. The app is beautiful – there's no denying that – but weird when considered alongside Google's other in-house apps. What's more, I'm of the opinion that the app isn't just a one-off in terms of design – I think that Keep, along with a few other hints, could give us some insight into what we'll see in the next version of Android (which we might see in May at Google I/O).

Before going any further, it would be prudent to explain my thoughts on the next version of Android and why I think we'll see a significant – though not total – visual shift, from current Jelly Bean paradigms to something, well, a little different.

From Gingerbread To Jelly Bean 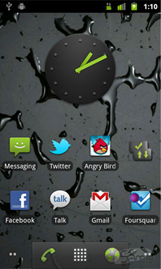 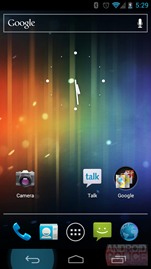 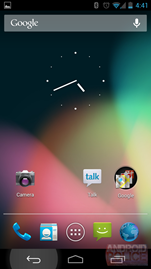 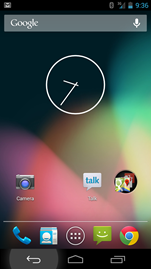 There's no question that the jump from Gingerbread to Ice Cream Sandwich (let's ignore for a moment the "emergency landing" that was Honeycomb) was a big one. In the interest of word economy, I won't enumerate the various changes that Ron chronicled in the excellent "Getting to Know Android" series. What I will say, however, is that the move from Ice Cream Sandwich to Jelly Bean was not as big. And the move from 4.1 to 4.2 was even smaller.

In my mind, Ice Cream Sandwich marked the moment when, for the first time, Android's interface felt right (oh, and it introduced Roboto, but more on that later). And Jelly Bean (in both iterations) was about refinements. Where ICS revolutionized the look and feel of the platform, JB went back with a fine-toothed comb, fixing and improving things while adding some headlining features like Google Now and Photo Sphere.

So, how does that tie in to the future of Android? Given the strong foundation ICS set for the OS, and the refinements made by Jelly Bean, my prediction is that the next version of Android (Key Lime Pie?) will fall somewhere in the middle. I believe we're seeing several clues about Android's new look, and it will be noticeable, but not a complete overhaul. So, what exactly are those clues?

Google Keep is an interesting case. Less than a day after we covered 1E100's discovery of references to Keep in Google Drive's source code, Keep went live. And then it disappeared. Then a couple of days later it was back again, this time with an app. Naturally, we did a full hands-on post with Keep, noting along the way its new and interesting UI.

The interface is what I'd describe as a card hybrid. The app's functionality is – for the most part – contained inside a few cards of varying sizes: your notes, and a "quick add" panel for capturing text, lists, voice recordings, or photos. 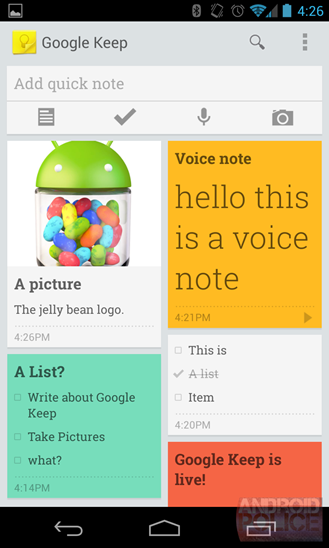 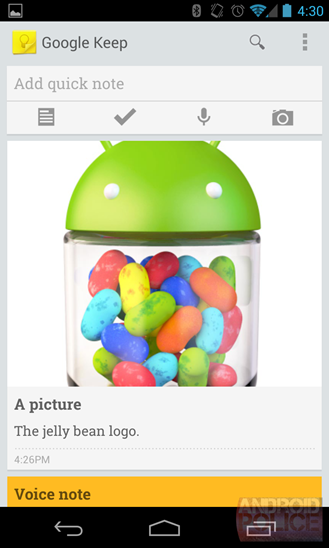 So what's so interesting about that? Well, a few things. For starters, there are several inconsistencies in UX – there's no overscroll glow within notes (Update: It's been brought to my attention that notes do have overscroll in certain instances – thanks Micheal!). Besides that, the action bar isn't actually an action bar (at least visually). Google has been known to bend the rules of Holo (I could write an entire piece on that alone), but the way the action bar area looks and appears in this app is worth discussing. Instead of a solid, blocky bar across the top, Keep's action bar is implied. The icons are there, and the up navigation works as you'd expect, but the bar blends in with the background to accentuate the card layout. The bar is also translucent – if you scroll down through notes, you'll see them glide underneath, each getting their own drop shadow along the way.

I would posit that, in future versions of baked-in Android apps, we'll see this hybrid card layout again. The barely-there action bar seems like a natural extension of the current Holo look, and I wouldn't be surprised to see it elsewhere in Android in the future.

All of these things are interesting on their own, but there's one stand-out feature in Keep that really speaks to my prediction, and it's called Roboto Slab.

Roboto Slab is probably bigger news than it's gotten credit for. Remember back in the days before Roboto, when Android had the Droid font family? Droid was eschewed in ICS in favor of the cleaner, simpler, more beautiful Roboto, but it only came in one variety – sans serif (though that included light, thin, regular, medium, bold, and everything in between).

Roboto Slab, Roboto's serif-fied brother, rounds out the Roboto family, though it was introduced silently with Keep, and appears absolutely nowhere else. Yet. And that's why it needed to be specifically shipped inside the Keep app.

The new font is almost certain to be a hint at future offerings. While it doesn't appear in the leaked Play Store 4.0, we must remember one of Ron's most recent finds: Google Play News. The per-issue and subscription based content service, headed for the Play Store who knows when, is the perfect candidate for the Roboto Slab serif + sans serif treatment.

Where else might we see Roboto Slab? My first guess is Google Play Books – interestingly, Play Books already uses Roboto regular (sans serif) but doesn't label it as such. It's just called "sans." This is probably because the "serif" font is still Droid Serif. Yes, that's right – Droid Serif still appears in Play Books. It only makes sense, then, that the family would be completed, eliminating the need for a mismatched pair of fonts.

Next is Google Drive which, embarrassingly, still uses both members of the Droid family. At least it's up front about the fact, though.

Other apps that might use Roboto Slab aren't immediately apparent, but I have no doubt that it will see further integration with Android's next steps.

The leak of Google's 4.0 version of the Play Store was exciting, to say the least. It's also important to the purposes of this piece – after all, it features again what I'm calling the "hybrid card" interface. At first glance, the yet unreleased Play Store looks like a game of Solitaire, but it mixes cards with traditional Holo in an interesting way. 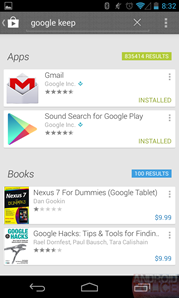 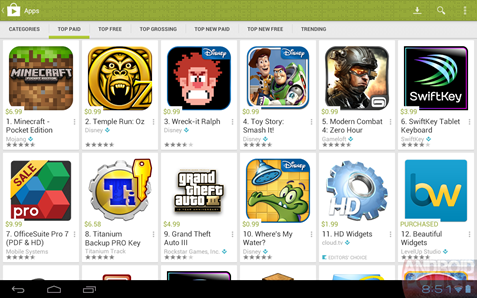 Unlike Keep, the Play Store maintains a solid action bar. From what I can tell, this is mainly to keep consistent color coding among the store's various content selections. Like Keep however, the new Play Store's design isn't afraid to put gray right on top of gray. The extraneous backgrounds and patterns of the old store are gone in favor of transparency, with text laid straight over the background. We also see cards in a variety of shapes and sizes, with varying amounts and types of information. Heck, even the purchase dialogue looks like a big, floating card. 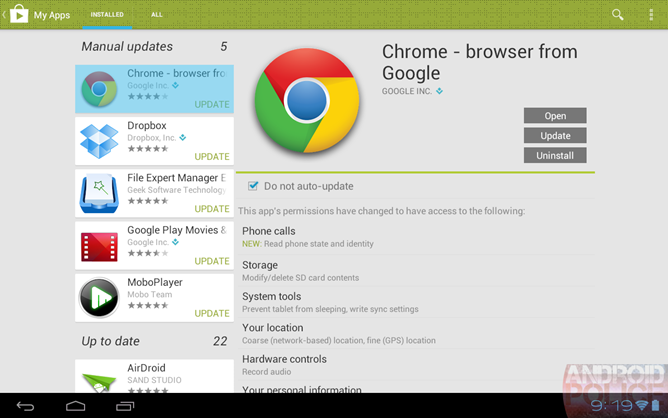 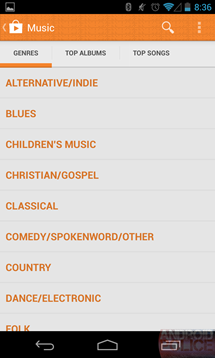 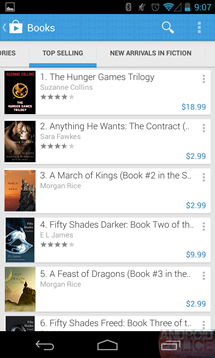 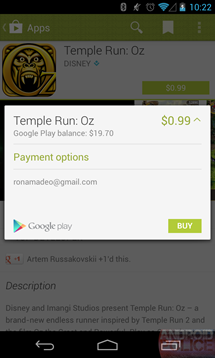 What's interesting, though, is that the new Play Store takes cards beyond just displaying information. As an example, the Editor's Choice and Staff Picks buttons look like cards. Or is it that the cards behave like buttons? With this design, Google is getting close to blurring the line between the two, but the sense of what the user can interact with (and how) still remains clear.

So after exploring several of these garden paths, what is the take-away? Essentially, I predict that with a new release of Android, we'll see a subtle yet sizeable shift in the UI of Google's in-house Android apps. Apps like Calendar, Books, Messaging (fingers crossed for Babble), and others will take on the fresh look of a hybridized card UI with lighter buttons, less background bulk, and an intuitive sense of what can be touched and when. Things will get lighter. I wouldn't be surprised if the "Holo dark" system theme shrank a bit in favor of the new aesthetic language.

On top of all that, Android will once again have a united font family called Roboto with its Sans Serif and Serif branches serving their individual purposes both in apps that need a font update, and those that have yet to come to market.

At any rate, we don't have too much longer to see whether any of my wild-eyed predictions come true.