If QWERTYs are your thing, the Samsung's Galaxy Stratosphere II on Big Red is one of the only choices left on the market. And while it may be nothing to write home about in general, it is getting a nice bump up to Jelly Bean right now. Announced officially on the Verizon Blog just a bit ago, the update has started making its way out in phases and brings all sorts of fun goodies like voice search, enhanced notifications, Google Now, and lots more. 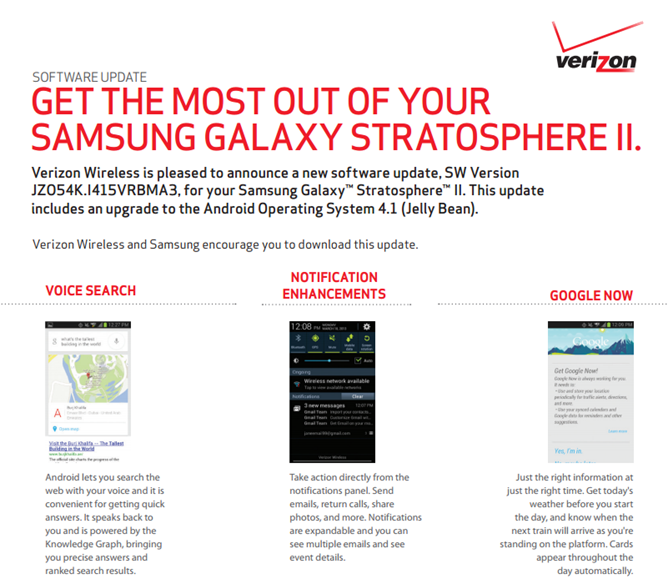 Aside from the stock Android enhancements, Big Red also decided to throw Verizon Remote Diagnostics and Polaris Office on the device. To offset the balance, however, it also removed VZ Apps, Verizon Video, Zappos, Color App, and the icon for the VPN Client. How thoughtful. Post-update, you'll also be able to S Beam QuickOffice files.

Otherwise, some general connectivity improvements have been made, including improved streaming on Pandora, better SMS sending and receiving, and enhanced Wi-Fi connectivity. So, some new stuff.

If you want to see if the 506MB update is available for you right now, head into Settings > About Device > Software Updates > Check now. Enjoy.