Real Boxing has garnered quite a bit of success on iOS, and with a little help from NVIDIA, it's grabbed headlines on its way to Android as well. Though the game was first spotted running on the Shield hardware, it's now available on other Tegra devices. With a title as pretty as this, it would be a shame to run it on anything less than the most advanced hardware out there - too bad we'll have to settle for a Tegra 3 for the time being.

Though Real Boxing is superb as far as the graphics are concerned, the rest of the game falls flat. Fans of the boxing niche may be able to overlook its slow, methodical gameplay, but other players will be less forgiving of a grinding pace and punishing difficulty. The uphill battle to win even the early fights is made no less frustrating by the presence of in-app purchases - a fact that might be less annoying if it weren't for the heavyweight price tag. If you want a showpiece for your Tegra 3 device that has the highest concentration of sweaty men, go for it - otherwise, throw in the towel.

Real Boxing falls somewhere in between Infinity Blade and a console boxing game in gameplay, leaning towards the former, with its wait-and-see actions. While your fighter's feet move on their own, you can jab, cross, hook, and uppercut with either arm, block, dodge, and clinch. All are handled with simple taps and gestures that can be learned in under five minutes. 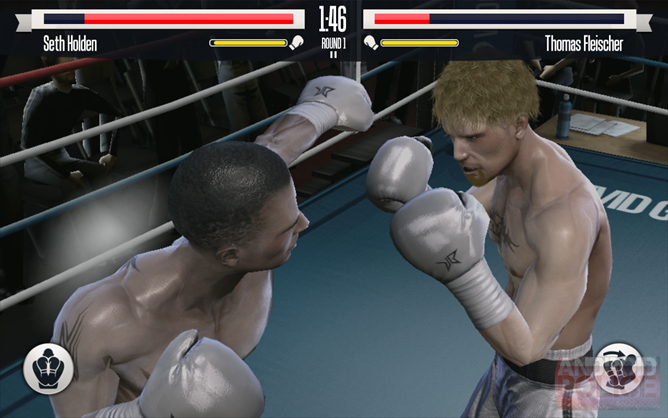 The key to beating your opponent is timing, and watching both the on-screen prompts and the other fighter for contextual clues. Executing a block will give you a split-second in which to return a punch of your own, while dodging at the right moment gives you a slow-motion opportunity for a punishing triple-power riposte. Those with patience and skill will be able to master these, slowly. Those without won't be able to do so at all. Though it's certainly possible to follow the ebb and flow of the fights, most of the time you'll be feebly trying to avoid an overpowered opponent's blows or desperately trying to sneak in a few of your own. Get the rhythm wrong more than two or three times in a fight, and you'll be knocked to the mat almost instantly.

Once there, you'll need to tap furiously to try to hold on to your dwindling consciousness. On a starting fighter, it's usually possible to come back from your first trip to the mat, and nearly impossible to do it a second time, so make those taps count. When you beat the ten-second countdown, you'll get a health boost (as will your opponent) and you can try again. Clinches work in a similar fashion, and are usually a better option if you're close to being knocked out.

Your customizable fighter will be basically the worst boxer in the world at the start of the game. You can improve his health, stamina, and speed in the gym with basic rhythm games overlaid on punching bags and jump rope. These mini-games are entertaining enough, and offer a nice distraction from the main game... but not often enough. You'll have to complete five more grueling fights before you can get the chance to improve your fighter again, and it's usually no more than 1% even for a perfect run.

The end result is a game that will force you to grind your way through dozens of one-off bouts before you can ever win your first tournament, most of which you will lose. Your opponents seem to be able to come back from knockdowns indefinitely, and they unleash powerful, unblockable blows in rapid succession and without warning. When you win, it'll feel like the game gave you a break, not a hard-earned victory. All so you can stagger back to the gym in hopes of getting that tiny, tiny edge, and do it all over again. And in case you're wondering, no, there's no multiplayer option. 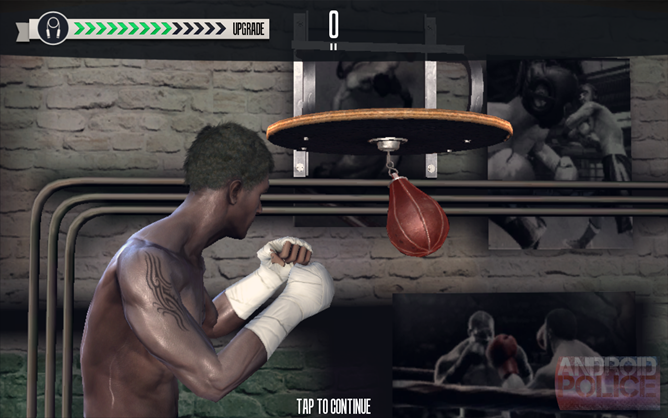 This grinding gameplay serves a purpose, but it's not one that many gamers are likely to appreciate. The slow progression is meant to steer you towards in-app purchases. More on that in the section below.

It's All about The Show

The visual and audio presentation in Real Boxing is just about flawless for a mobile game, at least on Tegra 3. (For comparison purposes, this review and all the screenshots were done on a Nexus 7.)  The Unreal engine is certainly strutting its stuff - It's hard to think of a single title that can match the visuals for realism alone. While the game certainly won't be giving current-generation consoles or PCs a run for their money, the polygonal fighters are undeniably impressive, as are the visual effects. 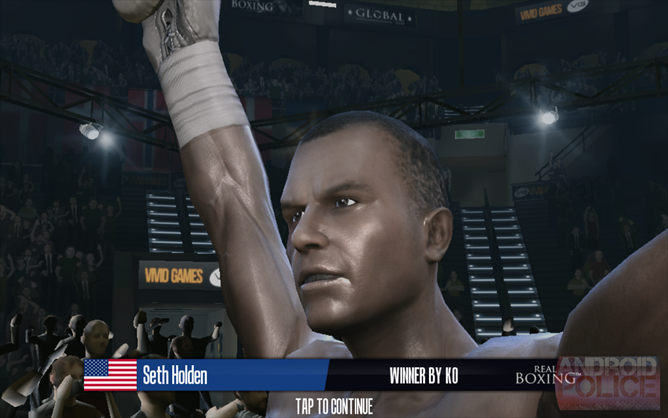 Fighters sweat, bruise, jab, swing, and collapse in entertaining fashion. On a particularly cringe-inducing knockout replay, you can see your opponent's mouth guard fly out in a tasteful stream of blood. Lighting effects, including flares and sheen on your fighter's muscles, push the realism (for lack of a better word) to a new level. With the possible exception of the water effects in Riptide GP, I simply haven't seen any other Android game that can beat Real Boxing from a visual standpoint. 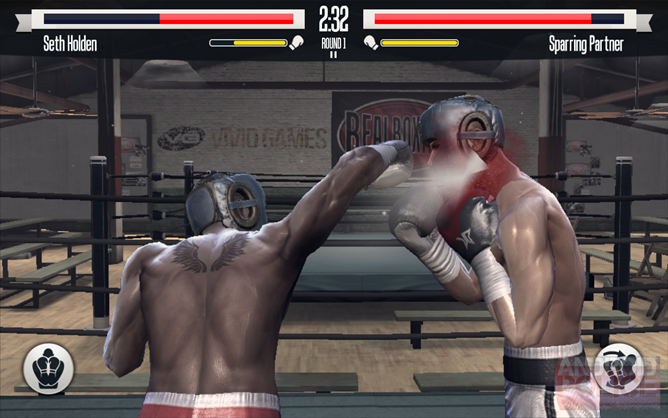 A large part of the appeal comes from the fact that you can customize your fighter to your liking, at least to some extent. While his face and body are static (and basically identical to every other boxer in the game) you can adjust hairstyle and color, clothing, gloves, and tattoos on no less than four body parts. While the options are far from limitless, it'll give you a greater connection to your in-game avatar. Of course, your ability to customize your fighter is artificially limited by the in-game currency. It's hard to shell out 250 points for ginger mutton chops when they could go towards desperately-needed stat improvements. 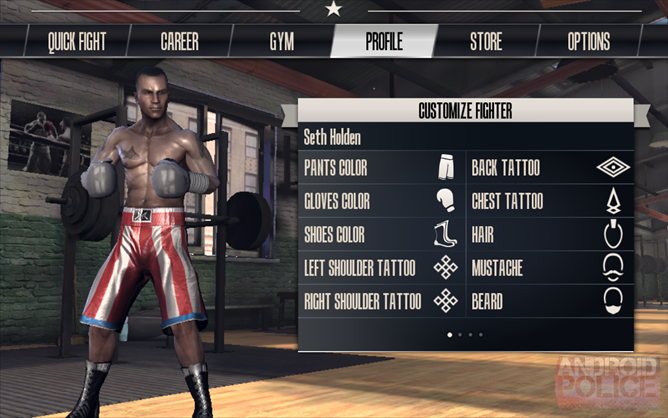 While the graphics are certainly pretty, they'll grow stale after a while. With just two boxers and a little eye-candy onscreen at any given time, there's not much to distract from the stiff animations and cut-and-paste faces. There are a handful of locations, none of which will impact the fights themselves in any way. Audio is likewise well done, with the announcer or coach barking out reasonable facsimiles of "real" boxing talk. Unfortunately, it's all generic - throwing in the names of the pre-built boxers couldn't have been that hard, could it?

A few weeks ago Ryan lamented the fact that EA's Real Racing 3 was a good game brought down by one of the most frustrating in-app purchase schemes seen yet. Real Boxing (developed by Vivid Games, no relation) isn't quite that bad, but it's clear that nearly every element of the game is intended to steer its players towards spending real money on the in-app currency, which is the only way to advance aside from the limited training mode. We're almost used to this treatment, especially from big, flashy titles... but not from games that cost $5 to begin with. 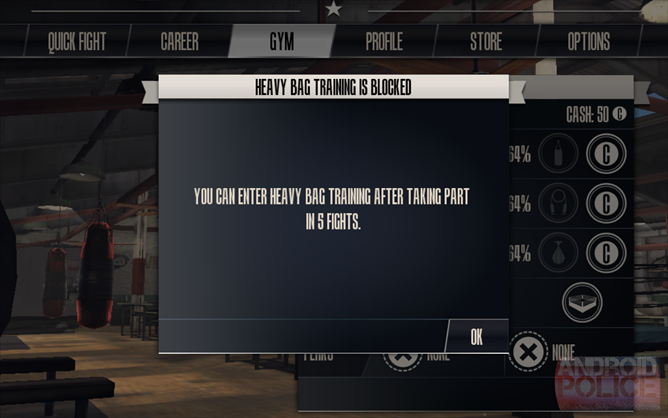 Want to improve your stats more than once every five fights? Spend some money. Want those stylish purple shorts? Pay up. Options that would be included in a boxing or fighting game on a console are out of your reach in Real Boxing without spending real cash or slogging through fights until you win one. Which wouldn't bother me, if it weren't for the high price tag, or the that Real Boxing claims to be the equal of the previously mentioned console games.

It's certainly possible to play and win Real Boxing without spending a dime, but you'll be doing it without many of the customizations so prominently featured in the marketing, and you'll be paying with your time instead. Whether the game is worth either is up to you.

Like the women who circle the ring holding up the round cards, Real Boxing is nearly all style and no substance. The core mechanics of the game are slow and intentionally slanted against you, and even if they weren't, it's hard to believe that anyone but the most die-hard boxing fan could appreciate the limited nature of the actual fights. There are plenty of better fighters available, even on Android, especially if you're willing to go outside of the boxing niche. 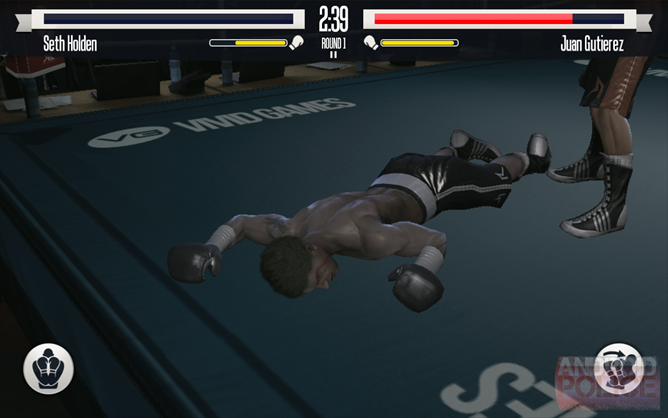 I'd say that the game would be improved without the constant push towards in-app purchases, but honestly, it wouldn't make much of a difference. While the technical presentation of Real Boxing is nearly flawless, and the developer deserves points for an intuitive control system, there's just not a lot of fun to be had here. You mighty as well dust off the NES and play a few rounds of Punch-Out instead.