When Google announced Keep last week, one of the coolest features we learned about is the ability to accept the "note to self" command that has been part of Google's Voice Actions since the Froyo days. Previously, this would send an email to your own account with the transcribed text and the original audio file. Keep allowed users to send that data to a proper note-taking app instead. Well, as it turns out, Catch wants in on that voice action, so in a recent update, it's added the ability as well. 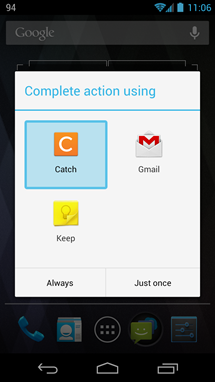 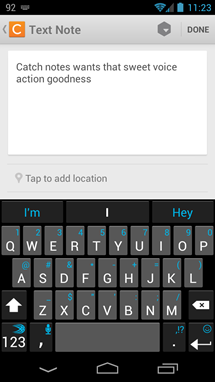 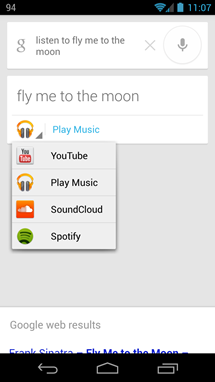 You know that scene in Who Framed Roger Rabbit? where, after roughly a forever of being handcuffed to Bob Hoskins, Roger casually and without a word slips his hands out of the handcuffs while Bob is attempting to saw them off? To which Bob asks "You mean to tell me you could've taken your hand outta that cuff at any time?!" Roger replies, "No, not at any time. Only when it was funny." That's kinda how I'm feeling about this new update.

On the one hand, this is fantastic. The 'note to self' command was always one of those things that seemed like a fantastic idea, but had limited usefulness for anyone who uses proper note-taking apps. On the other hand, if Catch, Springpad, Evernote and the like could've hooked into this Intent before, the last several years feel like a complete waste of time. That being said, there's no real indication that this was possible before, and Catch is probably using something undocumented to accomplish this. Still, now that it's been done, it would not be surprising to see the other note-taking apps add this ability, if they're smart. This also makes us wonder about the ability of other apps to hook into voice actions. The closest thing beside this command is the ability to use the "listen to" action with other apps, as seen in the far-right screenshot above. But no default selections there.

It's also worth noting that I was unable to get this to work on my Nexus 10, where I had already set Keep to the default, even after clearing them. It worked fine on the Galaxy Nexus, however, where I had not done so. It's unclear whether the two are related or if there's a different bug preventing the option from appearing when using the note to self command, but your mileage may vary.

Update: Some users reported and we confirmed, Evernote does this too! It's unclear when this was added. The last update to Evernote was the major revision to version 5.0 yesterday, so it may have been then. In any case, this is great news. So, Springpad, where you at?