The rumors were true and now T-Mobile has launched its new, simplified, contract-free plans. Starting at $50/month for unlimited talk and text with 500MB of high-speed data (throttled, but sans overage fees after that), the new services allow customers to forget about counting minutes and messages and focus solely on data. This could be good or bad news, depending on your usage, but perhaps the most important aspect of these new plans is that you can get them without a 2-year commitment. 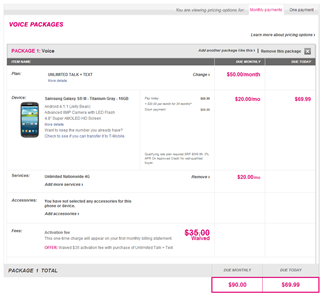 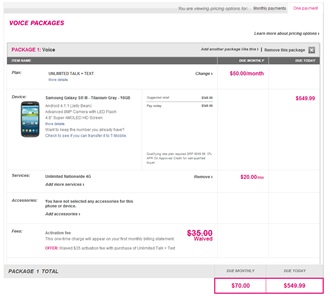 You can select to get the new plans with or without a new device (which some carriers will allow you to do already), but if you do decide you want to buy a phone from T-Mobile, you'll have two tabs: 'Monthly Payments' or 'One Payment'. If you select the former, you'll see the subsidized cost of your phone and a scaled recurring charge for your device. The Galaxy S III, for example, has a $20/month charge, while the HTC One S has a $15/month fee. This, coupled with your down payment (the traditionally 'subsidized' price) will equal the total cost of the phone. If you select 'One Payment' option, you can elect to pay all of that at once. In other words, whether you pay it all up front or over the life of your contract, you know exactly how much you're spending on your phone, when, and why. And you don't pay more for the device just because you sign a contract. It's less of a vague subsidy and more of an optional monthly finance plan, only without interest.

Having this aspect of your plan distinctly separated out, and unlimited talk and text bundled in no matter what happens, you have only one concern left: data. As stated before, the plans start at $50 for 500MB. After you cross that threshold, your speeds will be dropped to 2G. For those who don't remember the dark ages, that's deplorably slow. On the upside, tethering is included. Not that you'll want to tether a laptop to a connection with such a low cap, but T-Mobile is at least making the consumer-friendly choice of not forcing you to pay more just to use a capped amount of data on a different device. The option is yours.

If you want more than that, though, you have two diverging options. The first is to select a capped data plan that has tethering built in. Every tier costs $10 more than the last one. So, 2GB costs $60/month, 4GB is $70/month and so on all the way up to 12GB for $110 per month. For comparison's sake, Sprint costs $110 for unlimited everything, but charges extra for tethering. AT&T's 3GB DataPro with unlimited talk and text costs $120/mo, does not include tethering, and every 1GB over costs $10. Meanwhile, Verizon offers a 2GB shared data plan for $100/month. Obviously this is not a comprehensive overview of all the plans on the different carriers (we haven't even looked at AT&T's shared data, nor any family plans), but comparing apples to apples, T-Mobile seems to be very competitively priced.

If you absolutely don't want a data cap no matter what, though, you can opt for unlimited high speed data, which will tack an extra $20 charge on top of the base $50 plan. The total $70/month plan is the same price as the 4GB package, but lacks tethering, so you should really only get it if you know you'll use more than 4GB every month. You can add tethering to an unlimited plan as a separate package, but you'll start facing slow downs if you share too much data with other devices. Tethering options start at $10/month for 2GB (a total of 2.5GB shareable), so at this point you're already looking at $80. You'll want to take a close look at how much data you truly need before opting for the unlimited plan and buying tethering separately.

Of course, this is ignoring the possibility of, say, buying a Nexus 4 off contract with tethering built-in (or...ahem...other methods of getting the add-on), but the overall takeaway is that T-Mobile is providing options and, in a shocking move for a carrier (even this one), it simplifies the consumer's decisions and offers fairly reasonable rates.

Of course, the trade-off is that T-Mobile still has yet to get its LTE network up and running (though, it's close) and the coverage is not all that great. Hopefully the MetroPCS merger will help it out. As that deal draws closer, while Sprint and Softbank dance ever nearer to each other each other, the challenges to the incumbent nigh-duopoly have never been greater. Here's hoping this trend of being consumer-friendly keeps up, though.