T-Mobile customers have been waiting for what seems like ages to get their hands on some sweet, sweet Long Term Evolution data speeds. In five days, the wait is over... assuming you live in one of seven disparate states and cities in the lower forty-eight. According to a leaked document posted by TmoNews (which has an excellent record for this sort of thing) T-Mobile's networks in Houston, TX, Las Vegas NV, Phoenix, AZ, Kansas City, MO, San Jose, CA, Baltimore, MD and Washington DC will activate next Tuesday, March 26th. 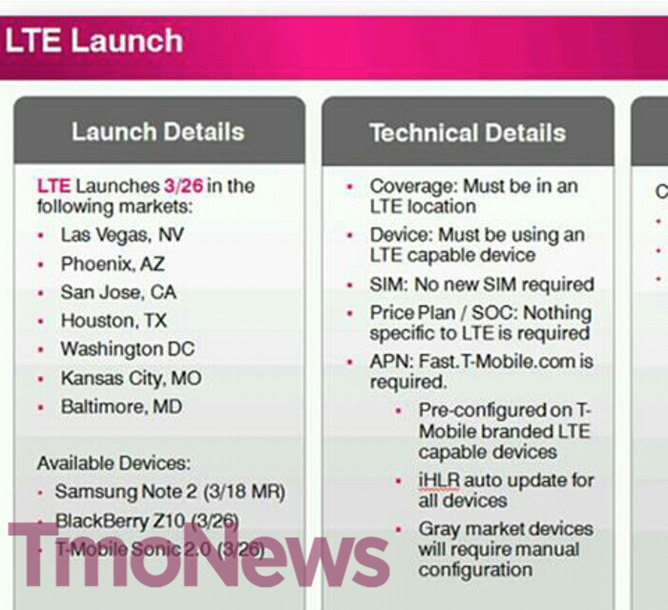 Of those limited launch sites, only a few smartphone users will be able to take advantage of the new speeds, Samsung Galaxy Note II owners among them thanks to a recent software patch. The only other LTE smartphone on T-Mo's lineup is the Blackberry Z10, AKA The Slowpoke, which will be available in stores the same day. The Sonic 2.0 WiFi hotspot rounds out the short list. Keep in mind, not all the towers in the cities listed above may be upgraded, especially in spread-out urban areas like Houston and Phoenix.

Those of you on T-Mobile's Note II won't have to do anything to see the new speeds, presuming you've updated to the latest software. Bills won't be modified, at least for the time being. Here's hoping we see more LTE hardware headed T-Mobile's way - it's safe to assume that the Galaxy S4 and HTC One will be heavily promoted when they land on our shores.