It's been a while since we've seen a significant update to the look of the Google Play Store - in fact, it's been in its current form since before the "Google Play" brand superseded the Android Market. But it looks like there is a new version in the works, and it's quite a change to the Store we've become used to. Droid Life got a hold of an APK that purports to be build version 4.0.16 of the vending app. 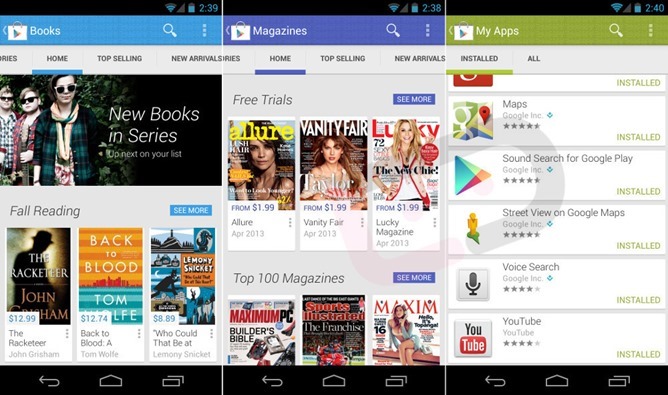 The interface on display is much lighter than what we're used to seeing, more like the web version of the Play Store. The home page is still divided into the various apps/music/movies/books/magazines departments, but the layout is split into standard Holo tabs. Featured content appears to get its own card, usually split into three highlighted Play Store entries. The curated lists of apps and other content still get a full-width banner. Sliding left or right gets to the more familiar list of top entries for the various sections, and the focus is more visual than the previous version of the Store.

Lists across the UI seem to be modeled after the cards in Google Now, though presumably it'll look very similar on just about any Android phone. Highlights include a pop-up message that disappears after updating an app (as the old Android Market used to have), a unified Update All button (even for just one app), and a more distinctive separation of the sections with their familiar color-coded headers.

There's no download link provided, and many of the functions in the previewed app are non-functional, so it's either an elaborate (and unlikely) fake, or a very early build. In the case of the latter, there's no way to tell when we might be seeing go live, though we wouldn't be surprised if it went out in an auto-update in the next month or two.

Update: Android Police has obtained a copy of the 4.0.16 version of the Play Store. Unfortunately we can't distribute this unfinished APK, but we can confirm that it's genuine, and we'll be doing a hands-on shortly.

NVIDIA's Tegra Team Shows Off Car Dashboards Of The Future, Running And Controlled By Android ...