As you can see in the beginning of the video, the concept is fairly simple. It's yet another predictive text input algorithm that allows you to be less accurate when typing. Nothing special, right? Aside from the fact that this one happens to be adapted to allow the keyboard to take up significantly less space on the screen. In a world where we're building tablet-sized phones to solve the tiny screen problem, it's a big deal to save precious display real estate.

If that were all the company is looking to do with this keyboard, it would be mildly cool. Things start getting crazy at about 1:15 in the video, though. Here we see a version of the app that floats over whatever you're doing and can be moved or resized as you see fit. We happen to love floating apps, so this works nicely for us. 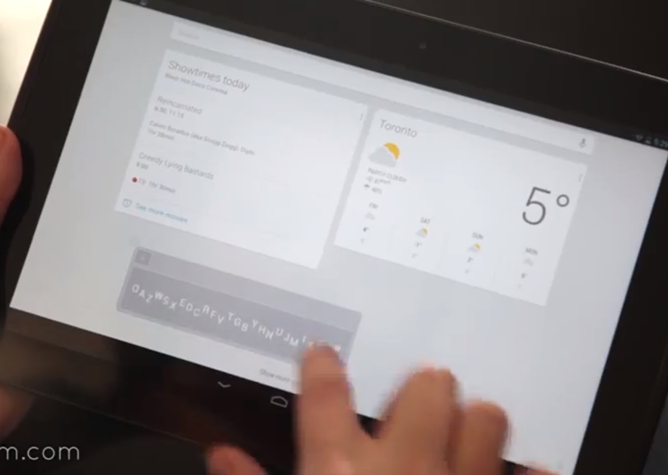 It doesn't stop there, though. The company behind Minuum is ambitious enough to be targeting other types of input as well. We see them demo a version of the keyboard attached to a smart watch that uses infrared sensors to type on a person's arm, and even a strip of paper connected to a display with some wires. While these are obviously unfinished technologies, the idea is pretty bold: by being able to put full QWERTY input on to a single line, modern sensors can move typing into a whole new world of form factors.

The project has currently received $1,485 of its $10,000 goal with 31 days left. We're tempering our excitement here because, as stated before, it's very easy for crowd-funding projects to disappear into the ether without so much as a beta. Furthermore, the utility of this app is entirely predicated on its ability to do what it says it can do and, without a review copy, we can't verify that it's as accurate as it needs to be.

Still, the $5 backer prize is early access to the beta by June of this year. Cameron was excited enough about this to invest himself, so assuming the company meets its goal, we should be able to provide a review of how well it works before too long.

[Deal Alert] Amazon Wireless Drops The Optimus G To $50 For New Contracts And Upgrades On AT&T ...

Let's Play A Game - How Long Did It Take You To Realize What You're Looking At?