Update 3/15/13: As of version 1.0.7, the application is now available in these additional locations: UK, Australia, Ireland, New Zealand, the Philippines, and South Africa.

Of all the shows that have ever been on TV in the history of time, I'm not afraid to admit that AMC's The Walking Dead is my absolute favorite. For those who may not be familiar with the show, it's the story of a group of survivors living in a post-apocalyptic zombie-infested world. As you can imagine, life is rough on the group of protagonists, as they have to find food, shelter, and other necessities in order to survive, all while fighting off the undead, which sometimes show up in droves. Then, with the current season, things get worse. I'm not going to go into details or spoil it for anyone who may not be up-to-date, but I will say this: if you haven't been watching TWD, you're missing out. 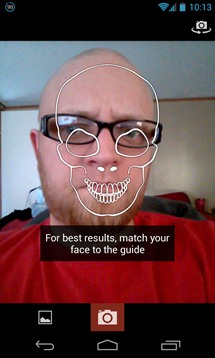 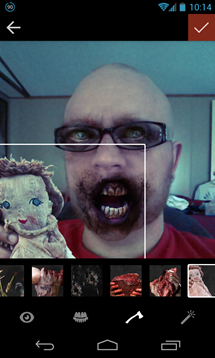 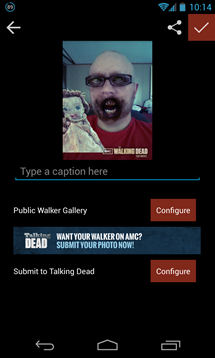 But I digress – this isn't about my love for The Walking Dead. It's about AMC's new Dead Yourself app that lets you see what you'd look like as a walker. If you've been following the official Walking Dead twitter account, you may have seen retweets of images created with the iOS version of the app, which was the first one to hit the scene. Now it's also out for Android.

The app is simple enough: take a picture of yourself, tweak the eyes, mouth, gory accessories, and photo filter. Upload the final result and show the world what you'll look like before munching down on their delicious guts. Naturally, I played with it for a while this morning, and these are a few of the results that I threw together in a couple of minutes: 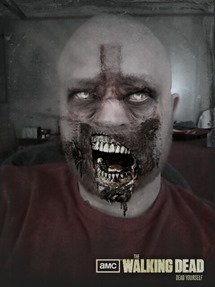 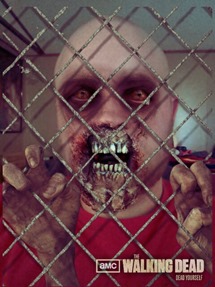 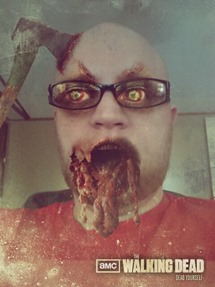 I've never actually seen a walker with glasses, so I had to satisfy my own curiosity and find out how it would look. Classy, in an "I'll eat your face" sort of way, I think. It's a good look for me.

So, if you've always wondered what you'd look like as an undead monster, now's your chance to find out. The app is free, easy to use, and pretty much awesome. Hit the widget to Dead Yourself. Caedere Is A Game Built Entirely With Tasker, Because Why Not?