We've all been there – it's dark, you drop something, need a little help finding your keys, or simply want to know what you just stepped in. Naturally, you reach in your pocket, pull out your phone, and hit the power button. The screen instantly becomes your flashlight. Of course, there are plenty of apps that can also toggle the camera's LED flash, which makes a much better flashlight than the display. One such widget, however, brings this functionality directly to everyone's favorite lockscreen widget: DashClock. 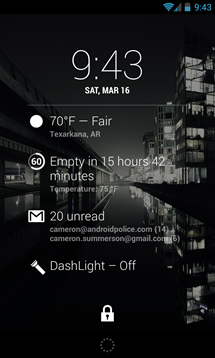 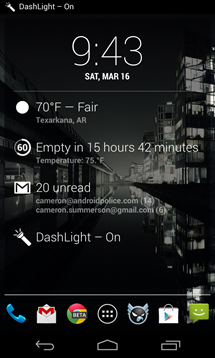 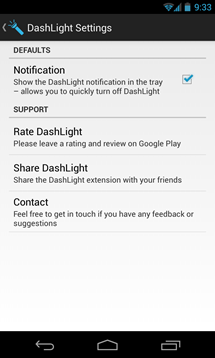 DashLight is quite simple in nature: it's just a toggle. Hit it, and the flash turns on. Hit it again, and it turns off. It really couldn't be easier. The only thing to be aware of with DashLight is that it can't actually turn on the torch without unlocking the device, as that's a limitation within DashClock. That shouldn't be a deal breaker, though – it simply unlocks the device before turning on the flash, so it's still just a single tap away.

DashLight is a free extension, hit the widget to give it a go. 'Google Keep' Spotted In Drive Source Code - Is Google Taking Another Shot At A Note-Taking Service?