This is one of those things that you just have to see to believe. Developer Dave Sapien is working on an "experimental pop up text adventure" that relies on Tasker as the development environment and Tasker App Factory to package the apk. This isn't a particularly easy feat, given that the platform is mostly unsuitable for complicated sounds and graphics. His solution is to make the entire game out of simple dialog boxes, each with two options that guide a player through the story. Around the 13th and 17th hour of every day (1pm and 5pm, respectively), players are presented with a new bite-sized adventure. Users are allowed to delay for an hour or rain-check their activity until the following day. Unfortunately, the constrained playback schedule won't allow for deep immersion in the text-based plot, but it remains fun for its short duration. 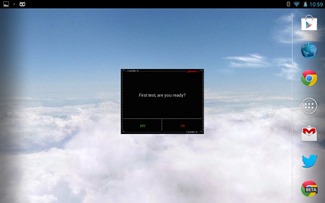 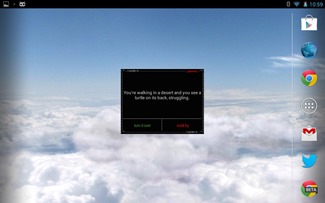 We have seen almost everything else done with Tasker, so a game seems like a logical step, but this is more like a proof of concept. The developer emphasizes that Caedere is an experiment, so it might be worth watching as development continues. This is definitely an interesting undertaking and Dave deserves some credit for such a lofty challenge. If you would like to check it out, hit the widget below. 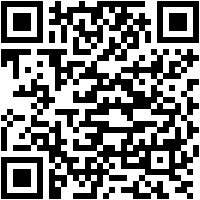 Turn Yourself Into A Flesh-Hungry Walker With AMC's New 'The Walking Dead Dead Yourself' App ...

Motorola Electrify 2 Currently Getting The Bump To Android 4.1.2