Bladeslinger is one of those games that makes a splash with impressive trailers and promises of console-level gaming, but how often have we been left heartbroken by similar titles? This game sets out to tell a story, so at least it has that going for it. William Glaston is just your average cowboy with a revolver-gun and robot arm, but things get weird when he returns to his home town of Hammer's Peak to find it overrun with monsters that used to be the townsfolk. The story unfolds as Glaston wanders the seedier parts of Hammer's Peak in search of his brother, and the cause of the corruption. Can this action RPG deliver?

Bladeslinger tosses you right into the action, and does a good job of explaining the controls to you. You have your choice of two control schemes: one-handed and two-handed. Bladeslinger strongly suggests you go with the super-innovative one-handed control method, and for this reason I have crowned this section of the game "scumbag tutorial." This setup seems okay at first. You swipe to slash with your blade, tap to shoot, swipe with two fingers to punch, and tap with two fingers to dodge. When you're not fighting, you just tap and drag to walk. If only it were that easy. 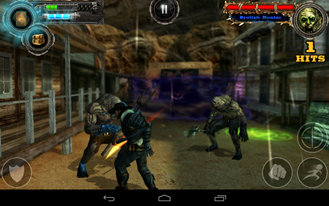 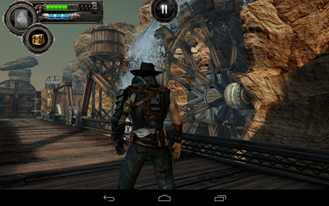 The problem with Bladeslinger's preferred controls is that you can't possibly manage the more intense battles later in the game with these gestures. You shoot when you mean to slash, dodge when you mean to punch, and just can't move around well enough to avoid getting destroyed. I was nearing my limits with Bladeslinger until I tried the two-handed controls and the game got so much better. This style has a virtual thumbstck on the left to move and buttons along the bottom for all your attacks, except for sword strikes, which are controlled with swipes on the right side of the screen. Trust me – it is not playable with the default controls, but is actually quite good if you change it up.

Throughout the game you're instructed to trace runes and shapes on the screen to accomplish various tasks. Unlocking new areas and performing finishing attacks are two prominent examples. I really like this system. It isn't pushed too much, and the finishing moves it can be used to trigger are genuinely useful.

Bladeslinger is heavy on the hack-and-slash battles, but there is a little strategy to be found as well. Some enemies have patterns that you'll have to sort out. Just running in guns blazing is going to get you impaled with a scythe, and no one wants that. Well, except for the monster with the scythe. Each battle gets you gold, which you can use to buy items in the store, or to unlock upgrades for your character. Bottom line here: I really enjoy the combat in Bladeslinger.

Now, about that gold... there are in-app purchases. There is gold, and also spirit stones to collect in the game. Yes, it costs $3 up-front, so what gives with the IAPs? I'm not pleased with this at all. I'd have preferred to just pay $6 for Bladeslinger and have it balanced in a way that I don't need IAPs. As it is, you might have to spend a little cash. You'll see a big benefit from buying health potions and upgrading your skills faster with money. There's a system of cards for special attacks, but they're expensive. Kind of insultingly expensive, actually.

I usually feel a little let down by games that tout enhanced Tegra graphics, but not this time. Bladeslinger is gorgeous. The town of Hammer's Peak comes to life on my Nexus 7. The textures are incredibly sharp, and the character models are awesome. Some of these monsters are so impressive-looking that I'm momentarily stunned. An example is found early on during the cutscene before the first boss battle. The "Barman" leaps across the room, throws a table, and roars at the camera. This all happens in the game engine, and it looks killer. 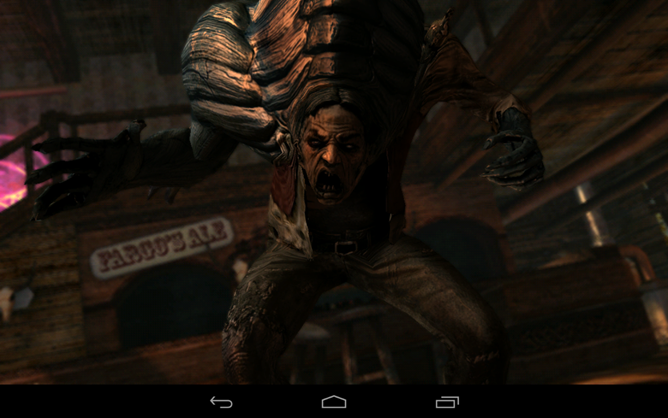 I have nothing but good things to say about the lighting effects as well. Shadows, lamps, fires – they all look great. This is what you get with the Tegra enhanced graphics. Tegra devices also have depth of field effects. This makes objects that are more distant look out of focus. When this works, it looks awesome. However, the focal range might be a little too shallow. There are times monsters right in front of your character end up blurry.

Performance on the Nexus 7 is 99% of the way there. I've had a handful of slowdowns, but Bladeslinger is more than playable.

On one hand I want to be outraged that a $3 game seems to be pushing you toward in-app purchases. On the other hand... Bladeslinger is really fun. Once you ditch those terrible one-handed controls, the combat is solid. I also find the story engaging, at least as far as mobile gaming goes. 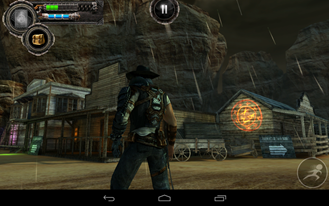 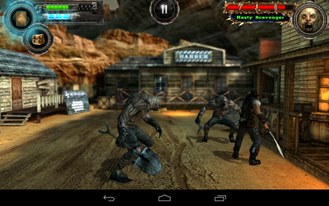 Even if you're not huge on hack-and-slash fighting, the visuals in Bladeslinger will draw you in. It's one of the best-looking games I've played on Android. If you're wary of in-app purchases, I won't blame you for skipping Bladeslinger. It's going to be a little grind-y without spending a few bucks. But maybe it's worth it to pretend this is a $6 game and buy a little loot.