Imagine combining Angry Birds, Final Fantasy Tactics, SpongeBob SquarePants, westerns, and so much more in a single game. I'm not sure if there is a better way to describe Squids Wild West by The Game Bakers, but it's pretty darn fun. 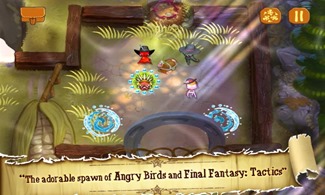 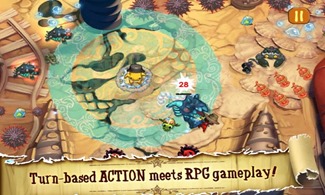 Squids Wild West picks up where the original SQUIDS left off. The sea is being corrupted by a black ooze that threatens to destroy the lives of our quirky underwater heroes. They must fend off infected crustaceans while searching for a way to stop the dark slime from consuming them all.

The game is loaded with colorful, western-inspired characters with a style that blends Angry Birds with SpongeBob SquarePants. Don't let that thought scare you - the result is much better than the comical setting would suggest. 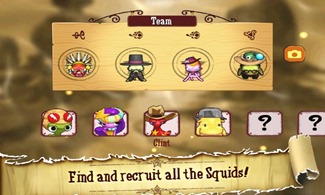 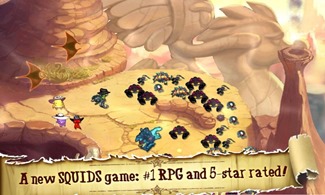 Gameplay merges bits and pieces from casual titles like Angry Birds and battlefield strategy games like Final Fantasy Tactics. Combat is turn-based, revolving around the familiar pull-to-aim mechanic for launching squid toward pigs enemies. Like many RPGs, each character is distinguished by one of four classes: gunners, healers, scouts, and troopers. The familiar 3-stars-per-round convention is also a bit different. Each star is granted for achieving specific requirements: survival of all characters, finding a hidden star on the map, and finishing within a certain number of rounds.

In-app purchases are present, but rest assured, they are clearly unnecessary to play. Most of the IAPs will net a few consumable items or can be used to unlock everything in the game. These IAPs are intended for people content with plowing through levels without much effort. Only a couple of purely cosmetic hats would require real money, but they are labeled as donations and have no effect on gameplay.

With so many elements from such divergent styles of games, Squids Wild West can feel a bit scattershot in the beginning. The developers have balanced the game nicely so that no one aspect overwhelms another. While RPG and strategic components are present, this is still a casual game with short, bite-sized rounds.

Unfortunately, Squids Wild West still has some serious bugs. My stock Nexus 7 can't get to a splash screen and there were a few crashes on my Nexus 4. Overall, everything seems well built and plays smoothly, so I expect the major issues to be resolved shortly. I would strongly recommend trying it immediately after the download completes, just to be on the safe side. The game is available in two versions, one at 127 MB and one labeled 'HD' at a hefty 341 MB. It's not clear which devices each one is supposed to target, but everything on my list is marked compatible with both. If you want to try your hand at flinging some cephalopods at some dirty crustaceans, hit the Play Store and give it a try.

AT&T: 'We Unlock Our Customers' Devices', Claims New Ban Will Not Negatively Affect Any Of Its ...