Back at Computex 2012 last year, ASUS showed off an 18" Windows 8 all-in-one desktop that could turn into a gigantic Android tablet simply by sliding the display out of the dock. Questions aside about whether anyone needs or wants an 18" Android tablet, the tech was certainly neat. This isn't a dual-boot situation, but rather two completely concurrent OSes being run on two separate systems in the same device. The whole of the hardware carries an Intel processor and NVIDIA SoC. Now, ASUS has seen fit to announce some launch details: it will be landing (with a thud) on April 12th at a starting price of $1299. 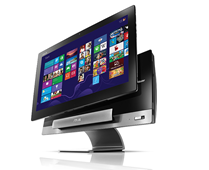 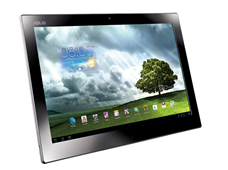 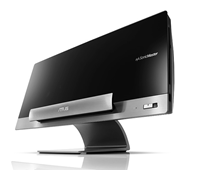 When in desktop mode, the device is running Windows 8 on top of a 3rd-generation Core i5. Here are the specs when in that configuration:

However, you can either slide the display out of the station or press a button on the side to switch to Android mode. Here, you'll be using a Tegra 3 processor to run the Android 4.1 experience. Here are the tablet-specific specs:

Let me repeat that last spec: 5.3 pounds. For comparison, the Nexus 7 is about 0.75lbs, and the Nexus 10 is 1.33lbs. While it's no surprise that a device nearly four times the size of the N10 (thanks Pythagorean Theorem!) would be four times the weight of said tablet, it's a usability concern no matter how you slice it.

Still, there's a market for everything and if you're looking to buy a decent all-in-one Windows 8 desktop—with a touchscreen monitor, no less!—and wouldn't mind picking up an 18" Android table tablet while you're at it, keep your eyes peeled around April 12th. This may just be your lucky break.

ASUS Launches the Transformer AiO
The world’s first all-in-one that is a powerful desktop PC capable of running Windows® 8 or Android 4.1 in desktop or tablet mode.

Fremont, CA (March 7, 2013) — ASUS today announced the all-new Transformer AiO.  The incredibly innovative ASUS Transformer AiO provides users the mobility of a tablet with the performance of a powerful desktop PC, all in an elegant design that is just as flexible on your desktop as it is in the home.  Combining stunning design and the imagination of ASUS, the Transformer AiO features a desktop PC Station with 3rd generation Intel® Core™ desktop processor technology for outstanding Windows® 8 performance, and a detachable 18.4-inch multi-touch display containing NVIDIA’s® Tegra® 3 quad-core for an optimum Android 4.1 user experience.  The innovation does stop as the tablet is also capable of running Windows® 8 in Remote Desktop mode.  No All-in-One PC has ever offered this type of flexibility, innovation or design, and it is only available from ASUS.

Advanced Technology and Options
ASUS Transformer AiO is a powerful all-in-one PC capable of handling a wide range of demanding Windows® 8 productivity and entertainment applications. Designed for desktop use, its PC Station is powered by a 3rd generation Intel® Core™ desktop processor with NVIDIA® GeForce® GT 730M graphics for outstanding performance.  ASUS
The Transformer AiO features comprehensive connectivity options, including four USB 3.0 ports – with speeds up to ten times faster than USB 2.0 – for plenty of peripheral possibilities and an HDMI out port so you can attach a monitor for extended display options including the capability to use the PC Station in Windows 8 mode while the tablet operates separately in Android 4.1 mode.
Its 18.4-inch LED-backlit display features 1080p HD resolution with 10-point multi-touch and IPS technology for bright, vibrant images with 178-degree wide viewing angles for shared enjoyment with coworkers, friends or family.
ASUS Transformer AiO also features dual-band Wi-Fi for high-performance wireless networking with compatible routers. ASUS SonicMaster audio technology delivers incredible sound so watching the latest TV show or movie, gaming, or enjoying a new album will always be an immersive audio experience.

Windows® 8 and Android tablet combined
When detached from the PC Station, ASUS Transformer AiO’s tablet can be used in two different ways. First, wireless Remote Desktop technology on the PC Station allows complete multi-touch control over Windows® 8 in tablet mode for easy access to the world’s largest collection of productivity and entertainment software.
Alternatively, the 18.4-inch IPS display can also be used as a standalone tablet with Android 4.1, thanks to its built-in NVIDIA® Tegra® 3 quad-core processor.  ASUS Transformer AiO switches seamlessly between operating systems at the press of a button and offers up to five hours of battery life*. The display also features a convenient carrying handle and a folding stand for comfortable tabletop use when away from the PC Station.

iOS Hit 'SpellTower' Comes To The Play Store, Marries Scrabble And Tetris For Your ...

[Update 2: It's Back] AT&T Announces One X Jelly Bean (Android 4.1) Update Is Rolling Out Today