Update: Twitter has removed the new detailed conversation view from the list of changes. We're not sure if that's because it's not there, or some other reason.

Twitter for Android was updated this afternoon with a few tweaks, bringing the app to version 3.8. Among the most notable changes is an enhanced conversation view, which now shows all replies (and related interactions) to a Tweet, whether going forward or backward in time. 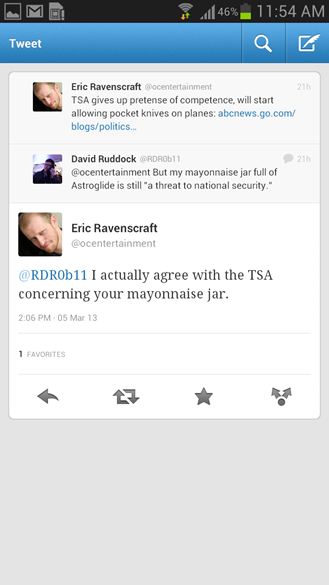 Twitter says the search function of the app has also been updated, and certain terms will return 'Top Tweets from big moments in the past' that will pop out from normal results, though I wasn't able to see any such tweets myself (it's likely rolling out slowly). Finally, the pull-to-refresh animation has been smoothed out, though I can't say I'm noticing much of a difference on my Note II. Hit up the Play Store to grab the update now, and see the full changelog below.

This update includes several improvements and bug fixes.
1. Top Tweets from big moments in the past pop out when you search for a given term. When you tap a Top Tweet in search results you can see more Tweets about that topic during that time
2. Never miss out on a conversation: see all the replies to a Tweet in the details view
3. Discover shows a new, smoother animation when you pull-to-refresh for more content
4. Additional bug fixes and improvements