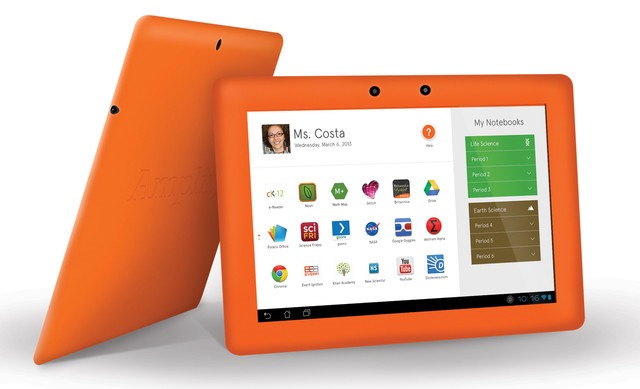 What these tablets offer that others don't, however, is lesson plan tools for teachers and software to help parents keep track of their children's progress. The company hopes to gain developer support to build more content for the Amplify system over time.

The tablets themselves will cost $299 for the WiFi model as long as you buy a $99/year subscription to Amplify content for two years, making this a $500 proposition. While some of the cost may be deferred over the length of the contract, the fact that you're committing to paying the exact same price as an entry-level iPad could put off a lot of customers. Especially if this is being targeted towards the education community which is not known for spending tons of superfluous money per child. There is also a $349 version of the device with a 4G data plan, but that contract is $179 a year contract. Call us skeptical.

No word yet on when this will be available, but the tablet is debuting right now at SXSW Education in Austin, TX.

Koush's Superuser App Now An Integral Part Of CyanogenMod, But You Won't Find It In The App Tray