Rumors are tricky things. On the one hand, one of the best ways to verify that a suspicious-looking leak is legit is to examine the track record of the leakster. On the other hand, when an image comes out that's nothing but a rounded rectangle with a few gradients, it should be assumed that the picture is complete bunk or, at best, resembles a real device by virtue of adhering to predictable patterns. Those two principles collided, however, when the legendary @evleaks tweeted the following images that turned out to be Expansys placeholder photos. 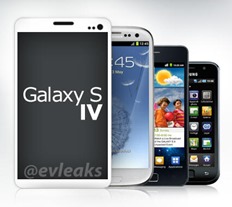 Here's the rub: @evleaks is generally a very reliable source. The images to come out of that account have been right more often than one would expect a single tipster to be and the mystery person behind it has earned a reputation for credibility. This led a lot of people to believe that, while this image may not be a finalized render, it could be indicative of Samsung's design process. Benefit of the doubt, at least, right?

However, if anyone else had leaked the above images, we would've laughed at them before deleting the email. The picture shows a rounded rectangle with no discernable features that, at best, looks like it could be something a Samsung designer put in a presentation as, well, a placeholder. Which is exactly what this image is. It just didn't come from Samsung.

@whatthebitour webdesigner made them !!! Evleaks stole them and added his logo :S

This is the difficulty in sifting through rumors. Outside of official confirmation or sources deep within a company, we're all doing our best to verify the validity of anonymous pictures and apply some critical thinking to sift the truth from the fakes. This happens to be a case where a reputable channel got some bad info that the tech blog world picked up. Lessons learned for better reporting next time.